EDO 2020: Nobody collected a kobo from Obaseki, PDP chieftain reveals 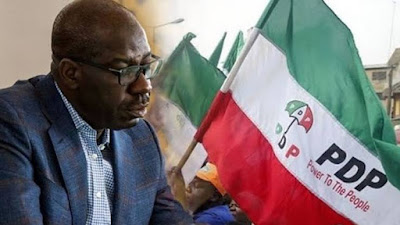 Contrary to speculations, a chieftain of the Peoples Democratic Party, PDP, Owere Dickson Imasogie has said the no leader of the party demanded or collected a dime from Governor Godwin Obaseki before he was allowed into the party to run as its candidate.

Speaking in Ilobi-Isi in Uhunmwonde Local Government Area of Edo state home town of former Chief Whip of the Senate of chieftain of the Action Democratic Party, ADP, Sir Roland Owie when he returned to the PDP over the weekend, Imasogie said the defection of Obaseki to the PDP was the hand work of God for the arty to take back the state.

He said: “Don’t make mistakes, the PDP members are the grassroots people not our brothers there and I can vouch for them that no one took any kobo from Obaseki before we allowed him in. Everyone knows that I say the truth always, some of you here are close to Obaseki, go and ask him if any local leader was given a kobo from him, no.

“We lost this state by our own mistake God is now helping us to regain it, why must we be demanding money? If any person demands money, it is not the genuine leader of the party who demanded money.  It is clear that PC is a failure considering the mass movement to PDP, we are appealing to everyone here to go home and put your units in order.”


On his part, Owie said  “Over the past 15 months, I have been consulting with political associates, former colleagues and Elder Statesmen on the need to get our Nation back on track.

“A recurring issue that emanated from that consultative process was the need for all founding members of the PDP to return to the Party so that it can achieve its strategic goal of emancipating Nigerians.

“Therefore, today I am returning to the PDP, the party I can call home, with a keen sense of purpose and a mission to work with the leadership and members in developing a sustainable developmental blueprint for Nigeria and jealously guarding the implementation of same.

“Because all politics is local, I must add that on the home front, my return to the Party would also ensure that Governor Godwin Obaseki is re-elected for a 2nd term.

“Beyond the continuity in the progressive institutional policies,  commendable and visible physical developments accomplished by the Obaseki-led administration, his second term would engender equity and co-existence, as the Governorship would then rightly move to Edo Central Senatorial District in 2024.

“Today the nation is still greatly divided, and almost back to her primordial lines. Our country is troubled; our people are afraid; our future is uncertain. We cannot build a great nation without unity at home.

“We cannot be a nation where people are hated, branded, and then hounded and ostracized. We stand here to declare that the Edo people remain an integral part of the Nigerian Project.”