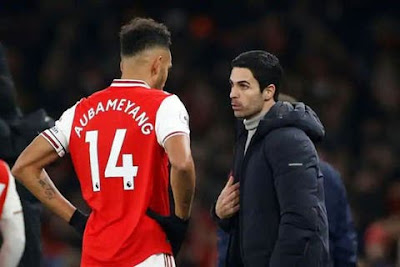 Aubameyang underlined his value to Arsenal with a brace in their shock 2-0 win over FA Cup holders Manchester City in the semi-final on Saturday.

But the Gabon forward has just a year to run on his contract and has been linked with Barcelona and Paris Saint Germain, with talks over a new deal to stay at Arsenal yet to produce an extension.

The 31-year-old has admitted he has a big decision to make over his future.


But Arsenal boss Arteta is confident his team’s improved form and their forthcoming FA Cup final appearance could be enough to convince Aubameyang to stay.

“Good and beautiful moments, they are always better than the bad ones,” Arteta said.

“As I told you, the way I look at him when I speak with him, he sounds pretty convinced.

“But obviously if he can see that success and the direction we are taking is the right one, I think he will be more positive about it, yes.

“Hopefully it will help him to be more convinced we are going in the right direction.”

Arsenal have clearly improved since Arteta arrived in December and Gunners defender Kieran Tierney said the Spaniard has created a better team spirit.

“It’s a good feeling in the squad now, it’s positive and that’s all you can ask for,” Tierney told Arsenal Digital.

“We’ve been working on that since the first day (Mikel) came in and we’re getting closer to where we want to be.

“I think you always need to believe, and coming into this game as well you had to believe we could win and we did that. We take confidence, we take belief and we’ll keep building on it.”