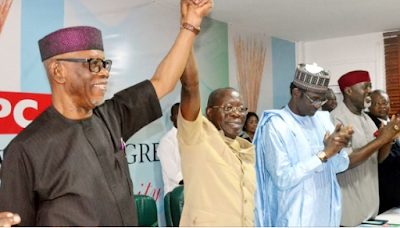 Adams Oshiomhole and John Oyegun, former national chairmen of the All Progressives Congress (APC), have been named as members of the party’s national campaign council for the Edo governorship election.

Oshiomhole and Oyegun had disagreed on a number of issues concerning the party. Oyegun accused Oshiomhole of fuelling the crisis in the party in Edo state, saying his brand of leadership was responsible for the problem at the helm.

Osagie Ize-Iyamu, APC governorship candidate, will be up against Godwin Obaseki, Edo governor and candidate of the Peoples Democratic Party (PDP), on September 19.

While the conflict between Obaseki and Oshiomhole lasted, Oyegun sided with the governor. He is also speculated to be working for the re-election of the governor.

In a statement on Thursday, Yekini Nabena, APC deputy spokesman, said Mai Mala Buni, chairman of the caretaker committee, named Abdullahi Ganduje, Kano governor, as chairman of the campaign which has 49 members.

“This followed the approval for the constitution of a National Campaign Council for the 19th September, 2020 Governorship Election, by the National Chairman of the APC Caretaker/Extra-Ordinary National Convention Planning Committee, H.E. Mai Mala Buni,” he said.

“The campaign council will be inaugurated on Monday, 6th July 2020 at the party’s national secretariat.”