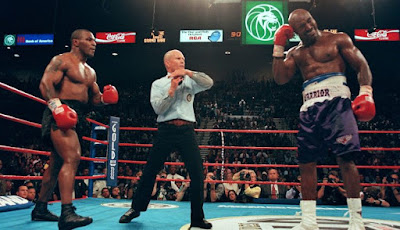 Mike Tyson and Evander Holyfield are negotiating a potential third fight for charity, after Iron Mike teased a return to the ring on social media.

Evander Holyfield has revealed he is in negotiations with former rival Mike Tyson over a trilogy bout and the pair are close to agreeing a deal.

Tyson has been teasing a comeback on social media over the past month and has said he would be open to fighting in four round exhibition bouts for charity.

Holyfield, who famously had part of his ear bitten off by Tyson in their 1997 rematch, had also been pondering a comeback and is hoping to fight Iron Mike in a charity exhibition for his foundation.


Holyfield said: “His people have been talking to my people and we haven’t yet got a solid deal together, but it’s coming that way.

When I told people about it, they saw me working out and they kind of put two and two together.

“They must be coming together to do this. But the fact of the matter is, I don’t mind if we do something like this.