COVID-19: Europe stirs back to life as lockdowns ease 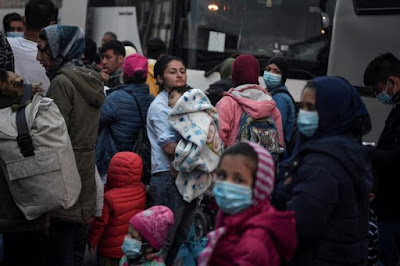 Workers banged away at construction sites in Rome, police handed out masks in Madrid and older children returned to school in Vienna as Europe on Monday gingerly stepped out of its coronavirus lockdown.

With their death and infection rates slowing and their economies in ruins, some of Europe’s biggest countries decided it was time to test whether something resembling the old way of life can resume.

“It appears that the initial wave of transmissions has passed its peak,” Andrea Ammon, the director of the European Centre for Disease Prevention and Control, told the European Parliament.

Yet it was a much more sombre and cautious Europe than the one that existed before entire nations shut down to ward off an illness that has now officially claimed more than 245,000 lives worldwide.

The piercing sounds of hammer drills echoed across a radiantly sunny Rome as 4.4 million blue collar workers — an estimated 72 percent of them men — picked up their tools again.

The big excitement across the country of 60 million was that people were finally free to take strolls in parks and visit relatives for the first time in nine weeks.

Red round stickers with white outlines of footprints showed commuters where the could stand on platforms and in train cars while respecting the new social distancing rules.

Restaurants that had been shuttered since March 12 were doing basic cleanups as they prepared to resume takeout service.

“We are feeling a mix of joy and fear,” 40-year-old Stefano Milano said in Rome, summarising the mood of many in Italy and across Europe.

The leaders of Spain, whose lockdown rivalled Italy’s for its length and strictness, apologised to the country’s children last week for confining them to their homes since mid-March.

Spanish kids reclaimed the streets after six weeks on April 26, and everyone was allowed to start going out and getting some exercise on Saturday.

But the streets remained deserted, and police distributed free — and mandatory — face masks to the few commuters passing through the turnstiles of the Madrid metro.

“We are all afraid,” Cristina Jimenez, 31, said while exiting Madrid’s Sol metro station, her mask and rubber gloves on.

“Who hasn’t lost their job already may lose it in the next few months,” she said.

“But what is important is that we are well. With work, you can always find another.”

“We have a lot of appointments for today — actually, for the whole week,” said Ramazan Uzun, a 27-year-old barber in Berlin whose business was allowed to reopen on Monday.

But Uzun said he did not necessarily agree with the easing of restrictions, which has allowed museums, places of worship, playgrounds and zoos to reopen as well.

Some of Germany’s smaller shops were back open for business on April 20.

“I live with my parents, who are old, and it would be good to be able to go home without having to worry.”

High schools reopened across the central European country, but only to allow the most senior students prepare for this month’s graduation exams.

Lea Karner, her face largely hidden by a cloth mask, was thrilled.

“I am really happy because I can see my friends again, and I can just concentrate a lot better at school than I can at home,” she said, visibly giddy in the sunshine.

“And I am happy to see my teachers again.”

Karner said she had to fight her mum and little brother for access to the family’s only laptop.

“It was very tiring,” she sighed.

The front doors of city buses were locked and the front rows chained off to protect drivers from infections as some commuters in Brussels returned to their offices for the first time.

But few people dared to venture out in a country with one of the world’s highest per capita death rates from the virus. Those who did take buses and trains wore mandatory masks.

“I am happy to be able to leave my house again,” Jean-Baptiste Bernard, a 27-year-old architect, said as he stepped out of the Schuman metro station.

He said this was the first time out since March 18.

“I am fed up with confinement,” he admitted, calling working from home an “intense” experience he would rather do without.

While most offices across Belgium are now working, the country’s shops will not reopen until May 11.

“I never imagined that such a small thing could bring so much pleasure.” Nebojsa Marovic, a 42-year-old musician, said while soaking up the sun on the terrace of his favourite Belgrade cafe.

Serbia reopened its restaurants, while its Balkan neighbour Croatia gave the green light to businesses involving close contact with clients, such as barber shops.

Slovenia also largely returned to business, although face masks were mandatory in public places across all three countries.

“I now realise that it is these little things we too often take for granted that really make life so precious,” Marovic said.

Alexis Protopappas admitted that he was tired of looking “like a bear” as he popped into an Athens barber shop, which was allowed to reopen along with bookstores and a few other businesses.

“I look forward to going out and resuming my social life,” he said.

But only about a tenth of all businesses were reopening Monday.

“Those who are out working today are mostly exhausted by the confinement,” electric equipment store owner Nikos Kontos said.