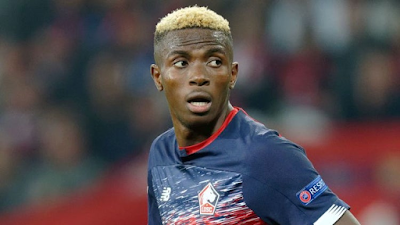 Lille striker Victor Osimhen says he turned down the chance of joining some of Europe’s top clubs following his impressive performance at the 2015 U-17 World Cup in Chile, where he emerged tournament top scorer with 10 goals.

Osimhen in an interview with British tabloid, Independent UK, said immediately after the tournament, he had offers from Barcelona, Juventus and Arsenal, but rejected them to join Wolfsburg in January 2017.

“I spoke with Arsene Wenger after the tournament ended and he wanted me to come to Arsenal,” the 21-year-old Osimhen told Independent UK.

“I had a lot of options. Barcelona; Inter Milan; Atletico Madrid; Juventus and the rest.”


“Arsenal was a good option but it wasn’t the best at the time. I wanted to start playing as soon as I turned 18.

“I wanted to go to a place where I had time to invest in my game and improve physically. Wolfsburg showed me that possibility.”

Osimhen however refused to close the door on a possible move away from Ligue 1 outfit Lille.

“I’ve spoken to Odion (Ighalo) about it. He gave me very good advice; he’s a legend and a big brother.

“My goal is to play at one of the biggest clubs in the world but now I’m very happy in Lille. My priority is to play a lot of games. Signing for a big club and being on the bench is not exciting for me.”