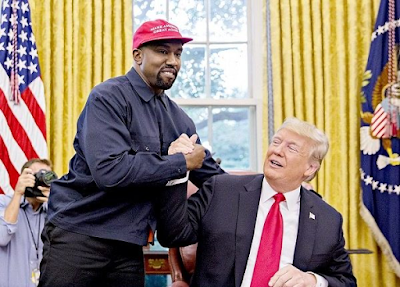 US rapper, Kanye West has averred that he would be voting President Donald Trump in the forthcoming elections in November, citing a booming real estate market as a key reason for his support.

In an interview with GQ Magazine, the music mogul noted that real estate business for him wasn’t as good during Barrack Obama’s government.

The 42-year-old rapper, who famously donned a Make America Great Again (MAGA) cap and visited Trump at the White House in October 2018, also stated that he’ll not allow others tell him how to vote because of his skin color.

“I’m definitely voting this time. And we know who I’m voting on. And I’m not going to be told by the people around me and the people that have their agenda that my career is going to be over,” he said.


“Because guess what: I’m still here! Jesus Is King was No. 1! I was told my career would end if I wasn’t with her [Hillary Clinton]. What kind of campaign is that, anyway?.

“That’s like if [Barack] Obama‘s campaign was ‘I’m with black.’ What’s the point of being a celebrity if you can’t have an opinion? Everybody makes their own opinion, you know.

“I buy real estate. It’s better now than when Obama was in office. They don’t teach you in school about buying property. They teach you how to become somebody’s property.”

In 2015, the rapper had announced that he intends to run for president in 2020 but later implied he would be opting for the year 2024, with Akon adding that he’s open to running alongside him.