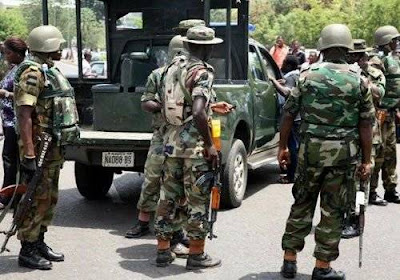 There is currently panic in some sections of Warri, Delta State, after some Nigerian Army personnel seen in a trending video threatened to rape and infect women with HIV in the city over the alleged killing of their colleague by residents.

In the 26-second long video, two unidentified soldiers could be seen swearing at the people of Warri and promising them a tormenting experience for daring to take the life of their colleague.

Speaking in disjointed Pidgin, one of the soldiers said, “Warri people, una don buy job o. Una kill soldier ba? Your mothers, I will make sure I f..k your mothers skin to skin without condom.

"You get mind to kill soldier ba? Dan ubanku.”


The police spokesperson in Delta State, Onovwakpoyeya, a deputy superintendent of police, said the video was detestable and looked like something that could have been produced by the terrorist group, Boko Haram.

She said no soldier was killed during the clash and that the police was investigating the video.

“I doubt if the people in the video are soldiers. No disciplined organisation would do that (talking about raping women). It calls for a lot of questioning,” she said.

The Commissioner for Information in Delta State, Charles Aniagwu, said the video was “just a social media creation”. A true military officer cannot produce and publicise a video in which he is threatening to rape women, he said.