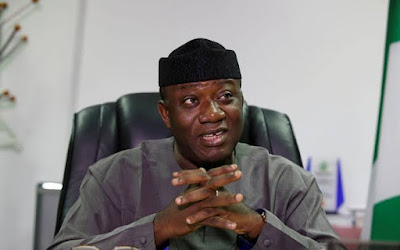 Gov. Kayode Fayemi of  Ekiti has directed that salaries of all political appointees in the State be slashed by 50 per cent with immediate effect.

Fayemi have the directive in a statement issued by the Commissioner for Information and Values Orientation, Chief Muyiwa Olumilua in Ado Ekiti on Tuesday.

He said the development was due to the ravaging effects of the COVID-19 scourge.

“The global economy has been severely affected and has affected Nigeria’s economy  as a nation and expectedly, Ekiti.


”As a responsive and responsible government, we have taken stock of our financial situation,” he said.

According to him, the pay cut will affect the governor, his deputy, Chief Bisi Egbeyemi and all political appointees down the line.

He however said that salaries of civil servants would not be affected in any way by the directive.

He said savings from the pay cut would be channelled into the execution and completion of developmental projects in the State, as hitherto planned.

”This sacrifice is for the welfare of Ekiti people above all other considerations.

“This is vis-a-vis the constantly decreasing receipts from the federation account, as well as the state’s dwindling internally generated revenue (IGR), and has therefore, been forced to wake up to the current realities of the state’s fiscal position.

” Your patriotism, patience, and co-operation, is highly appreciated at all times,” he said.