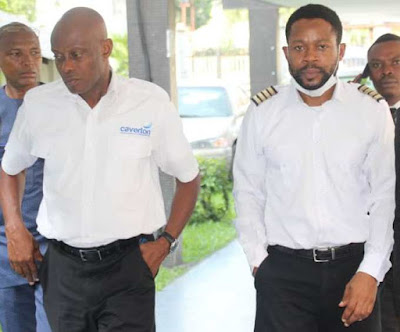 The Rivers State Government on Thursday said two pilots of Caverton Helicopters remanded in prison by a Magistrate Court in the state were not in prison but in a government hotel.

The two pilots, Samuel Ugorji and Samuel Buhari, were remanded at the Port Harcourt Custodial Centre on Tuesday.

Rivers State Governor, Nyesom Wike had led a team to arrest the pilots for flying people into the state amidst Coronavirus lockdown.

But the Federal Government had bashed Wike for arresting the two pilots and the passengers for flying into the State during Coronavirus lockdown.

He said the Police Commissioner and the Commander of the Air Force Base in Port Harcourt would have to answer for alleged incompetence and for going with Wike to arrest the pilots.

However, the Rivers State Government on Thursday said it moved the two Caverton pilots, to a hospitality facility owned by the government in Port Harcourt

Prof. Zacchaeus Adangor, the state’s Attorney General and Commissioner for Justice, who disclosed this, said the step was taken to protect inmates at the Port Harcourt Correction Centre.

Adangor said in a statement that the movement was after a Chief Magistrate Court granted his request for variation order on the detention of the pilots.

“Whilst the Honourable Attorney-General of Rivers State would ordinarily not want to discuss on radio any matter pending before a Court of competent jurisdiction, it has become necessary to correct the misinformation being circulated that the two Pilots arraigned before the Chief Magistrates Court, Port Harcourt, on Monday, 7 April 2020 are being remanded a the Port Harcourt Correctional Centre.

“The truth of the matter is that the Honourable Attorney-General of Rivers State applied for and obtained a variation Order from the Chief Magistrate Court, Port Harcourt changing the place of remand from The Port Harcourt Correctional Centre to any Rivers State Government-owned facility or building including Delta Hotels, GRA Port Harcourt.

“Based on that Order of variation of the remand order, the two pilots are being remanded at Delta Hotels, GRA Port Harcourt and are attended to regularly by medical personnel attached to the Rivers State COVID-19 medical team,” he said in a statement.