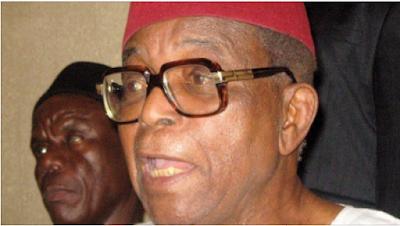 President Muhammadu Buhari has granted pardon to Ambrose Alli, a former governor of Bendel state, and Anthony Enahoro, a nationalist who moved the motion for Nigeria’s independence.

Rauf Aregbesola, minister of interior, announced the pardon at a press conference in Abuja on Thursday.

He also said Buhari had approved amnesty for 2,600 inmates across various custodial centres in the country.


The minister, however, said the president’s amnesty will not apply to inmates sentenced for violent extreme offences such as terrorism, kidnapping, armed banditry, rape, human trafficking, culpable homicide, among others.

Speaking at the briefing, Abubakar Malami, attorney-general of the federation, said 39 of the inmates were granted clemency – four of which are at the Kuje Custodial Centre.

Malami said the government’s action was in line with the advice of the UN which called on countries of the world to reduce the population of prisons so as to encourage social distancing.

Ja’afaru Ahmed, controller-general of the Nigeria Correctional Service, said there are 73,756 inmates in custodial centres all over the country, with 51,983 of them on the awaiting trial list.

In 1994, the regime of Sani Abacha, a military dictator, had jailed Enahoro for leading the National Democratic Coalition (NADECO).

The military regime of Buhari had sentenced Alli to 100 years in prison for allegedly misappropriating funds for a road project.

While Effiong was convicted and sentenced to life imprisonment for alleged concealment of treason in the coup led Maman Vatsa allegedly led against Ibrahim Babaginda, a former military president, in 1986.