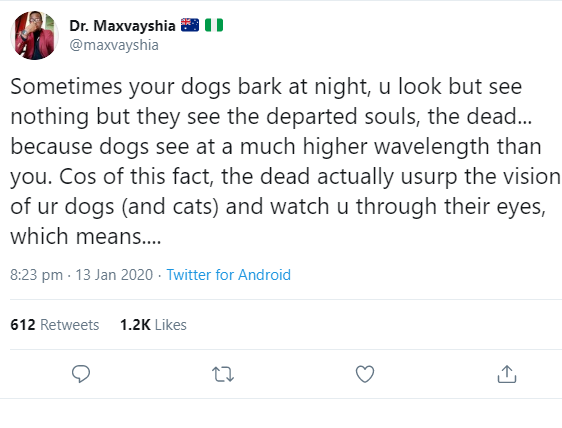 A Nigerian medical doctor has gone on Twitter to claim that the dead are everywhere. He went on to explain that some inexplicable things that happen around us are as a result of the dead moving about.

He also explained that sometimes when dogs bark at night, it is because they see the dead. He added that the dead take on the vision of pets and watch the living through their eyes. He said that, sometimes, when pets are looking at people, it is actually the dead using their vision to watch the living.

He also said that, not only do the dead take on the form of our pets, they also take over the body of humans to carry out ordinary activities that living beings engage in.

His tweets have led to a debate as people are asking for scientific proof to his tweets.

He tweeted: "Sometimes your dogs bark at night, u look but see nothing but they see the departed souls, the dead... because dogs see at a much higher wavelength than you. Cos of this fact, the dead actually usurp the vision of ur dogs (and cats) and watch u through their eyes, which means....

"Sometimes, at night, ur dogs stare at you but it's actually not ur dog or cat, it's the dead. They see you tru their eyes. As a matter of fact, many of d people who you buy things from, the people u walk past on the road at night, YOUR UBER DRIVER, the bike men, many are dead...

"The people who u buy things from at night. Many are dead but because of the presence of some mediumistic persons in d vicinity, their astral bodies (which is no different from ur own body) can be made tangible to you. The dead are everywhere. Those doors that slam, curtains..

"...that shift, they are mostly the activity of the dead and departed ones. They are always close to you. The dead are everywhere, especially at night."

Read his tweets below. 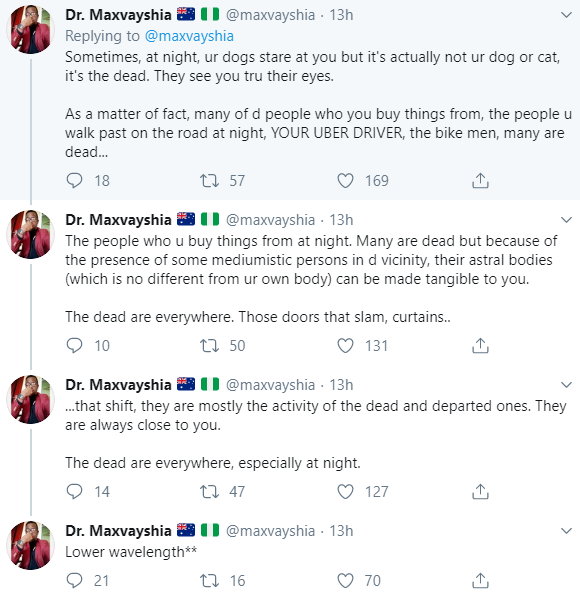 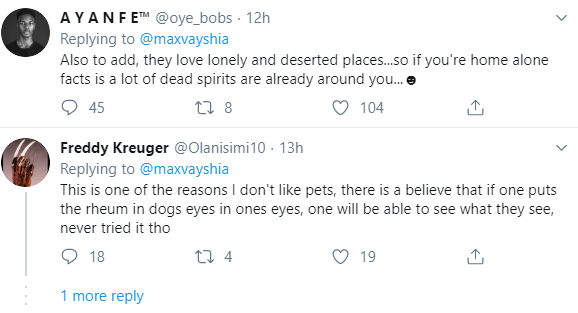