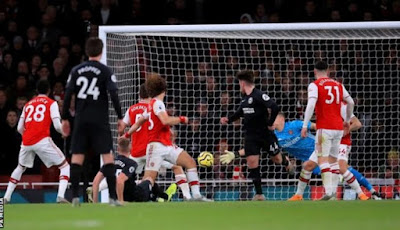 Managerless Arsenal’s season plummeted to a new low as they were beaten by Brighton in interim manager Freddie Ljungberg’s first home match in charge.

Alexandre Lacazette marked his 100th Gunners appearance by heading his side level after Adam Webster had given the visitors a first-half lead.

With the score 1-1, there was frustration for Ljungberg and Arsenal when David Luiz thought he had made it 2-1 with a volley but it was correctly ruled out following a VAR check for offside.

Neal Maupay headed Brighton’s winner from Aaron Mooy’s cross to leave Arsenal on their worst winless run since 1977 – and 10 points off a Champions League spot.


Arsenal, who are 10th in the table, have now failed to win any of their last nine games in all competitions and fans who stayed for the final whistle booed their team off the pitch after a tepid performance.

Twelve years after his last appearance for Arsenal as a player, Ljungberg was given a chance to show fans inside a far-from-full Emirates he is capable of managing the club where he won two Premier League titles and three FA Cups.

It started well, with the Swede given a decent reception by the crowd, before rapidly going downhill as Brighton, who had lost their previous four away games, took control.