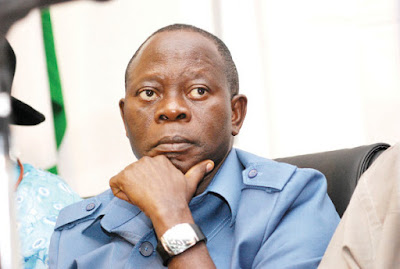 National Chairman of the All Progressives Congress (APC), Comrade Adams Oshiomhole says he becomes embarrassed when accused of trying to play the godfather in Edo State politics.

Oshiomhole, who stated this in a television dialogue on Friday, said he would have been able to influence the appointment of several people if he was a godfather, but that he was only able to convince Governor Godwin Obaseki to accept a founding member of his campaign organisation in 2006 as commissioner.

In his words: “My own embarrassment is when they say, Oshiomhole wants to be like a godfather. If I wanted to be, then I will be nominating Commissioners. I only persuaded him (Obaseki) to accept one Commissioner from me; only one and I gave my reasons- because he was a founding member of my campaign organisation in 2006, Mika. Other than Mika, I did not nominate any Commissioner, I did not nominate any Special Adviser, Special Assistance because for me these are governance issues. So where is the godfather role coming from?”

The APC national chair, who revealed his numerous efforts to restore peace in Edo State APC, recalled how he reconciled Obaseki with an APC chieftain, Charles Idahosa, with whom he had issues. According to Oshiomhole, “There was a time the governor told me that he would not have anything to do with Charles Idahosa because he lost his booth during his own governorship election and so has no electoral value. I invited both of them to my house and he did not know the other party was coming.


“When the governor entered the room, Idahosa sat and said he was not going to have a handshake with him and used a language for me that was derogatory. I said no, Charles you cannot talk like that. This is the governor and you must respect him. And I said, governor please whatever Charles has done that you are not happy about, we have won, put them behind you. I said in this business, if you don’t work with people because of their electoral value, sometimes you work with them because of their nuisance value. So you will not gain by saying you won’t work with this one or that one.

“If you ask Rev. Egharevba, I got to know that he was not participating in APC activities because of the way the governor was treating them. I drove to his house and I said ‘Rev, I met you in this party, so why are you leaving the party now.’ They were in ACN then before I came to form an alliance with them. He said ‘you introduced this man to us and look at the way he is treating everybody now.’ I said okay, with time he will change.

“I now asked him, who are you living the house for? Those in government are the tenants in power, the landlords are the members in the party and the leaders are the owners of the party. “It is the party that produced the governor, so if you are not happy with the governor; and are running away because of the governor, you will be leaving your own house for a tenant. This tenant’s maximum tenancy is eight years, but your party membership can be for life.”