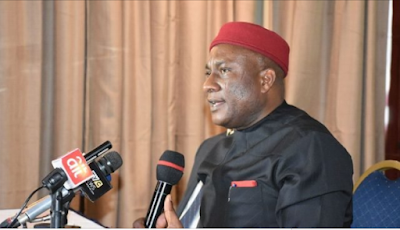 The Chairman of Air Peace, Allen Onyema, has dissociated himself from a suit against President Muhammadu Buhari government by an activist, Johnmary Jideobi, over his indictment in the United States.

The Abuja based lawyer had dragged the Attorney General of the Federation (AGF) before a Federal High Court in Abuja over an alleged move to extradite Onyema.

He requested for an order of the court restraining any agency of government with prosecutorial powers as represented by AGF from attempting to use or seeking to harass, threaten, arrest or invite Onyema in relation to Civil Aviation contract he entered with American authorities through his companies.

The fundamental human rights enforcement suit against AGF was filed by Jideobi as a Concerned Nigerian Citizen.


In a statement on Wednesday, Onyema’s lawyers, A.O Alegeh & Co., said their client had no hand in the suit.

It reads: “The attention of our client, Allen Onyema has been drawn to news reports now trending in the social media suggesting that an Abuja based Legal Practitioner, Mr. Johnmary C. Jideobi, has instituted an action in Suit No. FHC/ABJ/CS/1446/2019 – Johnmary C. Jideobi v. Federal Government of Nigeria & Ors at the Federal High Court, Abuja Division, purportedly seeking the enforcement of our client’s fundamental human rights.

“We hereby state on behalf of our client, that at no time did he instruct the said Mr. Johnmary C. Jideobi to institute any action on his behalf in respect of the subject matter of the Indictment now pending against him in the United States of America. Our Client has no knowledge of the said action and did not consent to the filing of the same. As a matter of fact, Our Client does not know the said Mr. Johnmary C. Jideobi.”

Last Friday, the US Depart of Justice said Onyema began travelling frequently to Atlanta, where he opened several personal and business bank accounts. Between 2010 and 2018, over $44.9 million was allegedly transferred into his Atlanta-based accounts from foreign sources.

Noting that Onyema founded Air Peace in 2013 and subsequently travelled to the United States to purchase multiple aeroplanes for the airline, DoJ said: “Over $3 million of the funds used to purchase the aircraft allegedly came from bank accounts for Foundation for Ethnic Harmony, International Center for Non-Violence and Peace Development, All-Time Peace Media Communications Limited, and Every Child Limited.

“Beginning in approximately May 2016, Onyema, together with Eghagha, allegedly used a series of export letters of credit to cause banks to transfer more than $20 million into Atlanta-based bank accounts controlled by Onyema. The letters of credit were purported to fund the purchase of five separate Boeing 737 passenger planes by Air Peace. The letters were supported by documents such as purchase agreements, bills of sale, and appraisals proving that Air Peace was purchasing the aircraft from Springfield Aviation Company LLC, a business registered in Georgia.

“However, the supporting documents were fake — Springfield Aviation Company LLC, which is owned by Onyema and managed by a person with no connection to the aviation business, never owned the aircraft, and the company that allegedly drafted the appraisals did not exist. Eghagha allegedly participated in this scheme as well, directing the Springfield Aviation manager to sign and send false documents to banks and even using the manager’s identity to further the fraud. After Onyema received the money in the United States, he allegedly laundered over $16 million of the proceeds of the fraud by transferring it to other accounts.

DoJ reminded the public that the indictment only contains charges and that defendants are presumed innocent of the charges, while it will be the government’s burden to prove the defendant’s guilt beyond a reasonable doubt at trial.