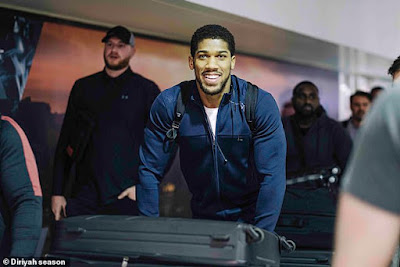 Anthony Joshua has landed in Saudi Arabia ahead of his heavyweight title rematch with Andy Ruiz.

Anthony Joshua landed safely in Saudi Arabia ahead of his rematch with Andy Ruiz Jr on December 7 and the Briton is promising to produce a performance to remember when the pair enter the ring.

Joshua, who was handed his first professional defeat by Ruiz Jr earlier this year at Madison Square Garden in New York, is fighting in a bid to reclaim the WBA, IBF, WBO and IBO belts and set up a unification fight in 2020 with WBC champion Deontay Wilder.

The 30-year-old was all smiles on arrival with his entourage as he was met by some fans and attention now turns to avenging defeat with a performance that boxing fans will speak of for years to come.


With four of the five heavyweight division belts on the line and Joshua's credibility at stake, there is a lot of pressure on the Watford-born fighter ahead of the rematch.

But Joshua appears relaxed despite the pressure and was in high spirits as he arrived at King Khalid Airport in Riyadh.

'It's going to be an incredible night and I'm thrilled so many of my fans are going to be there, particularly from the UK,' Joshua said.

'It'll definitely be a night people will tell their grandchildren they were at, one of those iconic evenings of boxing. Everyone from Saudi has been brilliant to work with.'

Now having touched down in the country, Joshua will set-up his pre-fight training camp in a bid to acclimatise in the build-up to the fight.

The 'Clash On The Dunes', as the fight is being dubbed, is the first World Heavyweight Boxing title fight to be held in the Middle East.

Joshua and defending champion Ruiz Jr will fight at the custom-built 15,000 seat Diriyah Arena in the heart of a UNESCO World Heritage site.

Victory is essential for Joshua if he is to get his career back on track with 2020 set to be another box-office year in the heavyweight division.