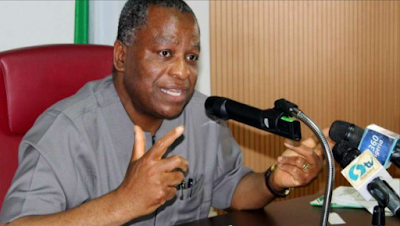 Onyeama made the accusation on Friday while reacting to Pandor’s statement that many Nigerians living in SouthAfrica are involved in drug trafficking.

NigerianEye had reported how the South African minister made the claim while reacting to concerns that the country’s security agencies are not doing enough to stop attacks on foreigners.

“I would appreciate them (Nigeria) in helping us as well to address the belief our people have and the reality that there are many persons from Nigeria dealing in drugs in our country,” she had said.

“A belief that Nigerian nationals are involved in human trafficking and other abusive practices.”

Quoting a story on the South African minister’s comment, he said: “It is precisely this kind of outrageous stigmatization of a people from senior government officials that fuel xenophobia and embolden criminals.”

The xenophobic attacks forced Nigeria to pull out of the ongoing World Economic Forum in South Africa. The country also recalled its high commissioner from the country.

Nigeria had demanded full compensation for its citizens affected in the latest attacks but Pandor saidthere is no provision for such.