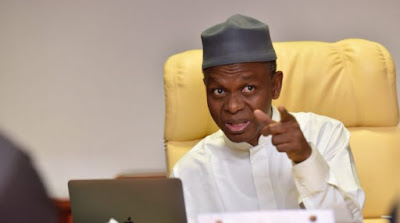 Kaduna State Governor, Nasir el-Rufai, says living outside Kaduna State will not save people from prosecution if they spread fake news about his state.

El-Rufai said this at the launch of a book titled, ‘Digital Wealth”, by blogger, Japheth Omojuwa, in Abuja on Tuesday.

According to the governor, both persons who tweet fake news and those who re-tweet risk being arrested if the effect of the fake news leads to loss of life or pandemonium.

He noted that social media could be used for good and also for evil and thus it would be wrong to look at only the negative sides.

“In Kaduna State, we have done that very aggressively because there are things that have been put on social media that have led to the death of people. So, we take it very seriously. You cannot sit in Port Harcourt or Lagos and start posting stuff that leads to societal instability in Kaduna and we let you go.

“We will file charges, we will go and collect you (sic) from Port Harcourt or Lagos and bring you before a judge in Kaduna and the judge will decide whether you are guilty. We’ve done that two or three times. The people we have done this to are still being prosecuted.”

The governor, however, promised that he would not interfere in court processes.

“If you want to tweet something about Kaduna, be very careful because I am watching,” he warned.

El-Rufai said he had been duly elected to protect the lives of 10 million people and would therefore not watch the state crumble due to fake news.

He said the state also has strong laws against such cyber recklessness.

The governor, who himself was accused of making hate speech in the last election and in 2015, is no stranger to controversy.

During the run-up to the 2019 election, he threatened that any foreigner that interfered in Nigeria’s elections would leave in a body bag, therefore, sparking reports that he was among those placed on a visa ban by the United States.

His government also sued a former Chairman of the National Human Rights Commission, Prof. Chidi Odinkalu, who had accused El-Rufai of exaggerating the killings in Kajuru for political gain.

In 2017, Audu Maikori, the chief executive of record company, Chocolate City, was arrested by the police on charges of incitement based on a petition by the Kaduna State Government attributed to his tweet on killings in a town in southern Kaduna.

Maikori later retracted and apologised saying the information was false.