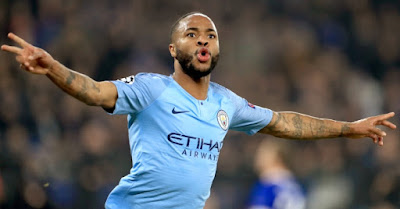 After two fine displays for England this week, national boss Gareth Southgate said Sterling has the potential to become as good as the duo.

Guardiola says “nobody can compare” with them currently but that Sterling should aspire to reach that level.

“It would be a dream for him, for all of us,” said the Spaniard.


“If Raheem can target that level – wow.

“We will be here to help him and of course he can do it but I will not be the guy to put limits to cancel it, to say ‘don’t, don’t think about that’. No, absolutely not – I want it.

“But right now, nobody in all the clubs in the world can compare with these two guys and what they have done every single week during 10 years.

“They are absolute legends and nobody can compare, nobody.”

Sterling has scored eight goals in eight appearances for club and country this season, including in both of England’s Euro 2020 qualifiers against Bulgaria and Kosovo.

Guardiola says he hopes Sterling does not get distracted by the praise for his performances.

“I’m so happy for him, for the way he’s playing here and with the national team, but hopefully he won’t read too much,” he said.

“He cannot listen to these kinds of things – that wouldn’t be good for him, because nobody can compare with Cristiano or Messi.

“I’m so happy with what he’s done since we’ve been together, not just right now. Everything that has happened to him has been good because he has an incredible work ethic and is an incredibly nice guy. I’m delighted for him.”