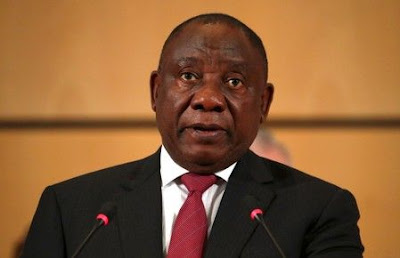 South African business leaders on Wednesday urged President Cyril Ramaphosa to push through reforms faster to lift the economy and curb investment outflows, as executives and policymakers gathered for a continental economic summit.

Frustration is building in Africa’s most industrialised economy.

Ramaphosa has promised sweeping reforms, but growth remains below 1 per cent a year and investors dumped 63 billion rands of South African assets this year.

He and his senior ministers are hoping to use the World Economic Forum’s Africa summit starting on Wednesday in Cape Town to change investors attitude to South Africa.


“We have to get the pace of delivery in a different mode,” Absa Chairwoman Wendy Lucas-Bull said on the sidelines of the WEF summit.

She urged the government to stabilize the country’s fiscal position more quickly and fire officials who had been implicated in serious wrongdoing.

“If individuals have been caught with their hands in the till they have to go,” she said.

South Africa was in a perilous position after this year’s investor outflows, which compare to inflows of around 20 billion rands in the same period last year, said Aarti Takoordeen, the Johannesburg Stock Exchange’s chief financial officer.

“Investment follows the narrative, and where the narrative is sound and predictable, the investment will flow naturally,” Takoordeen said, adding that South Africa was competing against other emerging markets for the same investment flows.

“Any investor wants to see action,” she said.

Ramaphosa said stimulating growth and restoring the credibility of state institutions was an arduous task, given the country’s apartheid past and problems inherited from his predecessor, Jacob Zuma.

“Implementation is my second name, and I want to see implementation all around. There is a great deal of impatience in our country, we understand that” he said.

Ramaphosa, who is on a drive to attract 100 billion dollars of new investment, said he was focused on moving the country into the top 50 on the World Bank’s ranking for ease of doing business.