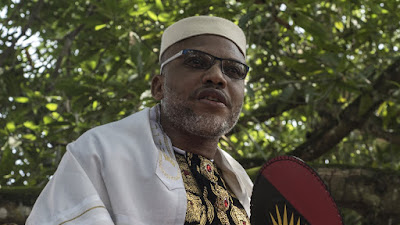 Nnamdi Kanu, leader of the Indigenous People of Biafra, IPOB, has been dragged before the International Criminal Court, ICC, in the Hague.

A criminal complaint was lodged against Kanu at the ICC by one Thomas Carroll of GAYLORD POPP, LLC, acting on behalf of the Incorporated Trustees of Make Nigeria Better Initiative, MNBI.

In the complaint, the ICC was also asked to order his arrest and prosecution.

In the criminal complaint dated 2nd September, 2019, the body anchored it’s complaint against Kanu on the fact that he issued a threat to attack President Muhammadu Buhari, during his recent visit to Japan to attend the 7th Tokyo International Conference on African Development, holding in the City of Yokohama, Japan from August 28-30, 2019.

According to MNBI, “Apart from the recent physical attack carried out by the group against former Senate President, Senator Ike Ekweremadu, by IPOB in Nuremberg, Germany, acting on the orders of the accused, similar threats have also been issued against the five south east governors, including Governors David Umahi of Ebonyi, Ifeanyi Ugwuanyi of Enugu, Okezie Ikpeazu of Abia and Willie Obiano of Anambra State.

“IPOB also put on notice Ndigbo leaders such as the President-General of the Ohanaeze Ndigbo, Nnia Nwodo, whom it accused of supporting “Operation Python Dance” which was launched by the Nigerian Army in the South-East in 2016 in the wake of protests by IPOB members who were causing havoc and forcefully demanding secession from Nigeria.”

MNBI prayed the court for the following request:

“That the ICC Prosecutor opens an investigation of the Accused on her own accord under Article 15 (1) of the Rome Statute;

” That the ICC Prosecutor also formally “submit to the Pre-Trial Chamber of the ICC a request for authorization of an investigation” of the Accused under Article 15 (3) of the Rome Statute;

“That the ICC Prosecutor compels the Accused upon conviction under the Rome Statute to pay the sum of $1,000,000,000 (One Billion US Dollars) as punitive damages for causing death, injury and maiming of several Nigerians through his acts of terrorism.

“That the ICC Prosecutor compels the British Government to expeditiously begin the process of cancelling the citizenship of Mazi Nnamdi Kanu, entering an Exclusion Decision and or Order barring him from all territories of the United Kingdom so he can return to Nigeria and face his treasonable felony trial pending before Honourable Justice (Mrs.) Binta Nyako sitting at the Federal High Court, Abuja.”