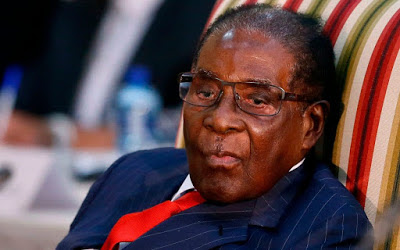 The body of Zimbabwe’s long-time dictator, Robert Mugabe, arrived in the capital Harare on Wednesday, after being flown from Singapore where he died last week at the age of 95.

His coffin, draped in a Zimbabwean flag, was carried by military officers out of the plane and down a red carpet flanked by soldiers, live television broadcasts showed.

“The entire nations of Zimbabwe, our people across the board, are grieving and are in mourning because the light, which led us to independence, is no more,’’ President Emmerson Mnangagwa told the crowd gathered on the airport runway.

The Zimbabwe government has said that Mugabe will be buried on Sunday at the National Heroes Acre, a hilltop shrine reserved for the country’s ruling elite.


But family members, awaiting the arrival of the body at the airport on Wednesday, declined to confirm the site of the burial, amid media reports that they opposed the choice of the National Heroes Acre.

Mugabe had been seeking treatment for an undisclosed illness in Singapore since April.

He died nearly two years after having being deposed in a military coup.

A former liberation fighter, who waged a guerrilla war against white-minority rule in what was then Rhodesia, Mugabe clung to power for nearly four decades, becoming one of Africa’s longest-ruling leaders.

Still revered by some on the continent for his fight against white domination, he is widely despised by others, who see him as responsible for destroying the country’s economy and violently oppressing any opposition.

The arrival of his body attracted hundreds of people to the airport and surrounding streets.

Live broadcasts showed them singing, ululating and holding up pictures of Mugabe as the motorcade carrying his coffin to an army barracks passed by.

The body was later due to being taken to Mugabe’s former residence.

It is then expected to lie in state on Thursday and Friday, ahead of an official funeral service on Saturday.