Things we learned in European football this weekend 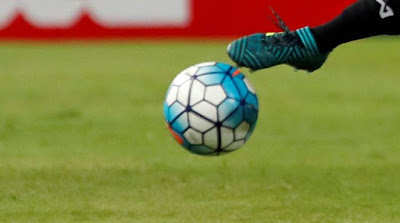 Barcelona got their season up and running even though Lionel Messi was again absent, while Paris Saint-Germain lost Kylian Mbappe to injury but saw another striker emerge from the shadows to grab the headlines.

Elsewhere, there was handball controversy in Germany, while a new-look Juventus started the season with a narrow victory.

AFP Sport takes a look at five main talking points from the weekend in European football:

No need for Neymar?

Barcelona might put their pursuit of Neymar on ice after they scored five, without Lionel Messi as Antoine Griezmann hit two, in a thrilling 5-2 win over Real Betis on Sunday. It was a much-needed victory after their opening defeat by Athletic Bilbao, which had raised familiar doubts around Ernesto Valverde’s future and an over-reliance on Messi.


If Barca appears well-stocked upfront, Real Madrid’s scoring problems remain. They were held to a 1-1 draw against Real Valladolid on Saturday, meaning Atletico Madrid, who beat Leganes 1-0, and Julen Lopetegui’s Sevilla are the only teams in La Liga with two wins out of two.

“This team has great champions, there have been so many changes and we wanted to raise the bar and trying to distort our DNA,” said Chiellini, quoted on the Juventus web site. The defender scored the only goal in the Turin side’s Serie A opener at Parma.

Sarri has taken over from Massimiliano Allegri this season with the task of delivering another style of more attractive football.

Choupo no longer a laughing stock

Eric Maxim Choupo-Moting’s first season as a Paris Saint-Germain player was best remembered for a remarkable miss from on the goal-line in a game against Strasbourg.

After three goals in 22 league appearances in the last campaign, many thought the German-born Cameroon international might be surplus to requirements this season, but on Sunday he was back on the field at the Parc des Princes and was the star in a 4-0 win over Toulouse.

The 30-year-old came on for the injured Edinson Cavani in the first half and scored a brace, including a fabulous first goal that drew the loudest roar at the stadium in a long time.

With Kylian Mbappe also coming off and, like Cavani, set to spend several weeks on the sidelines, and Neymar’s future still uncertain, PSG coach Thomas Tuchel may be turning to Choupo-Moting rather more often.

IFAB’s recent changes to the handball law caused confusion in the Bundesliga this weekend amid several disputed decisions.

Schalke coach David Wagner was left furious after his side had three penalty appeals turned down in a 3-0 defeat by Bayern Munich.

In the most controversial of the three, Bayern forward Ivan Perisic appeared to stop the ball with an outstretched arm while jumping in the defensive wall.

“It was a clear penalty. I am looking forward to the referee’s explanation because I would like to understand,” said Wagner.

Referee Marco Fritz told broadcaster ZDF that, while he might have changed the decision, he understood why the video assistant had not told him to review the incident.

“Clearly all handballs are equal, but some are more equal than others,” they wrote.

Porto’s ambitions for the season were derailed when they were ousted from the Champions League by Russian upstarts Krasnodar in the third qualifying round, leaving them to settle for the Europa League instead.

Meanwhile, they face a huge challenge domestically to end the dominance of Benfica, who have won five of the last six Portuguese titles, all the more so after losing at Gil Vicente on an opening day.

However, they have recorded back-to-back wins since then, including beating bitter rivals Benfica 2-0 in Lisbon on Saturday with goals from summer signing Ze Luis and Moussa Marega. The outlook may not be so bleak after all for Sergio Conceicao’s team.