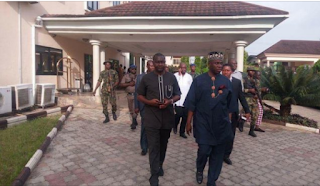 The misunderstanding between the duo took a toll on the Rivers chapter of the APC in the last elections as it could not field candidates, losing 50 positions.

Amaechi’s refusal to support Abe’s governorship bid had split the party into two factions. The factions held parallel primaries and congresses that were annulled by the courts.

The warring factions could not resolve the dispute and organise a valid primary before the deadline the Independent National Electoral Commission (INEC) set for submission of candidates for the elections.

Last week, Amaechi had announced that Rivers APC would hold a fresh congress but Abe kicked against it, asking the minister what gave him the power to announce a congress “without consulting party stakeholders”.

Abe explained that the origin of the crisis in the party started with the congress, asking why Amaechi chose to “reopen the sourest point in the heart of members of the party”.

“Everybody in Nigeria knows that the origin of the crisis in Rivers APC was from the Congress and how the Congress was handled and there are extant Judicial pronouncements on the last Congress which the party was misled to ignore and we have all kept quiet in the hope that by keeping quiet we will create room for resolution of some of these challenges so the party can move forward.

“Instead, you become more brazen in your challenge to the rights, feelings and interest of others within the same political party. How do we do that and expect to make progress?

“What kind of Congress, is he the Chairman of the party? Is he the National Working Committee? Is he the Court? What gives him the power to come and announce Congress on the day he was inaugurated as Minister?

“Rather than address the issues of the country and the issues of his Ministry, the first thing he could do was to reopen the sourest point in the heart of members of the party.”

Alleging that Amaechi is determined to “prove to the world that he is a conqueror”, Abe vowed to resist the moves of the minister.

“As I said before, nobody can conquer Rivers people. If you want the support of Rivers people ask for it, work for it and you will get it. Nobody is against anybody. We all left our homes to serve, improve our society and improve ourselves and to do that we need to work with other people,” he said.

“If we work with others and respect the views and sensibilities of others, it will help in creating an avenue for this party to move forward.

“Any other way by force or by fire is nothing but a pathway to self-immolation for the APC in Rivers State and we will not allow anybody to set the party on fire and destroy it.”