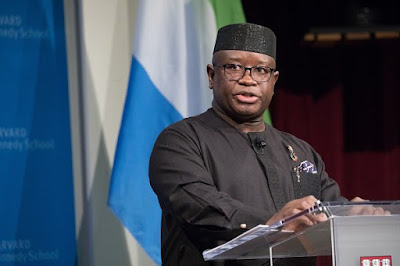 Julius Maada Bio, president of Sierra Leone, has sacked Fatmata Kargbo, one of his senior aides, over her testimony at Synagogue Church of All Nations (SCOAN).

A few weeks ago, Kargbo featured on Emmanuel TV, where she spoke about her recent appointment as an aide to the president and how she was able to complete her building project which has been on ground for years.

Kargbo, while giving her testimony, also showed off photos of the luxurious house and claimed God has been so good to her since her appointment.

“I want to thank God for blessing me with this job as SCOP to the president of Sierra Leone, ambassador at large and the blessings that come with it. If you look closely at this picture you will see the luxurious house God has blessed me with. I was living in a single room apartment. But my story is now different,” she had said.

Although Kargbo had intended the testimony as a way of demonstrating she has found God’s favour, a letter subsequently came from the office of the president announcing that the senior aide has been relieved of her duties.

According to Anadolu Agency, an international news agency, the country’s Anti-Corruption Commission (ACC) also said it has opened investigations into Kargbo’s finances to ascertain the source of the wealth with which she managed to put up the building within such a short time.

In a press statement, the AAC said it would be looking through her previous asset declarations in line with Sierra Leone’s anti-graft law that requires public officials to declare their assets three months into office and three months after leaving.

“The Anti-Corruption Commission has opened an official investigation into the conduct of the official and her testimony. We will also look at her source of wealth in acquiring her house and other properties.” the commission said.

“If it contradicts the anti-corruption act or we find instances of unexplained wealth, she will be charged to court and will be asked to pay a fine.”

It is believed that the video of her testimony had stirred outrage among Sierra Leoneans.