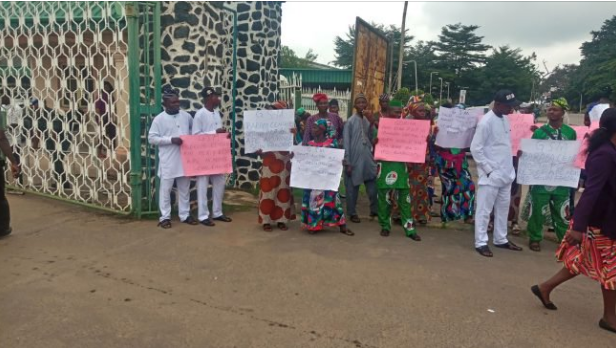 Senior citizens in Oyo state have protested the appointment of 27-year-old Seun Fakorede as a commissioner in the state.

The protest was held at the state house of assembly in Ibadan, the state capital, on Thursday.

Seyi Makinde, governor of the state, nominated Fakorede, a graduate of Obafemi Awolowo University, Ile Ife, as commissioner for youths and sports.

Adebo Ogundoyin, speaker of the state house of assembly, confirmed Fakorede’s nomination in his Facebook post on Monday.
“Let’s clear the air, the Oyo State House of Assembly has received the name of the 27-year-old Seun Fakorede of Ibarapaland as commissioner-nominee from the Oyo State government led by Governor Seyi Makinde,” he wrote.

The protesters condemned the appointment, saying Fakorede is a loyalist of the All Progressives Congress (APC), the opposition in the state.

According to them, the commissioner should not be allowed to work in the cabinet of the governor, who is a member of the PDP.

A twitter user, @PatriotAwaking, tweeted that “senior citizens protesting against the appointment of the 27 year old @TheSeunFakorede as Commissioner for youth and sport.”

Students and youth groups from various schools in Oyo state are also at the assembly gate in solidarity with @seyiamakinde and @TheSeunFakorede pic.twitter.com/i1B4wjNTcs
— PatriotAwaking (@PatriotAwaking) August 22, 2019