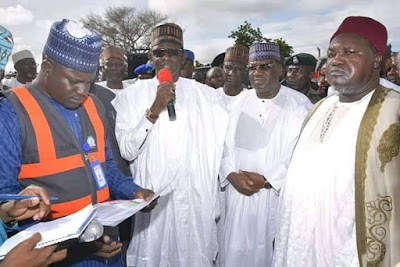 The President of the Senate, Dr. Ahmad Lawan and H.E Gov. Mai Mala Buni have expressed their sympathies with victims of flooding in Bade Local Government and ten other local government areas of the state.

During a visit to Chumbusko Village on the entrance to Tagali Village, one of the worst affected areas to commiserate with the flood victims, Governor Buni directed the State Emergency Management Agency (SEMA) to provide prompt assistance to the victims within 24 hours.

Already, the SEMA Executive Secretary, Dr. Muhammad Goje, who said that up to 4000 households in 13 local government areas of the state have been affected by flooding, has revealed that 2000 households have so far been reached with bundles of roofing sheets, blankets, carpentry woods and nails, mats and mosquito nets, kettles, buckets, bags of rice, cooking oil, children wears and toiletries.

In keeping with the directive of the governor, more will be done to reach more of the flood victims, he said.

In his speech, Governor Buni urged the people to consider the disaster as a test from Almighty God “for whom thanks must be given at every situation”. He also urged them to continue to pray for the Almighty to bless the rainy season and make it very productive for the people.

H.E Governor Buni assured the people of Tagali and surrounding villages that an asphalted road will be built in the area to make it motorable and accessible so that people would be able to move in and out easily.

The Senate President, Dr. Ahmad Lawan thanked Governor Buni for the prompt response to the flooding in the area, saying “we are confident in your leadership and your empathy for the people”.

Dr. Ahmad Lawan observed that siltation on the Kumadugu-Yobe River may have caused the river to overflow periodically, especially during heavy rains.

He promised that he will liaise with the Federal Ministry of Water Resources and the National Emergency Management Agency (NEMA) to ensure that the dredging of the Kumadugu-Yobe River, which was stopped at 50 percent from July last year, is carried on and completed.

The Senate President also pledged a cash donation of N10 million to help the victims cope with the disaster.

The Emir of Bade Alhaji Abubakar Umar Suleiman, who also spoke during the visit by the Senate President and Governor Buni, appealed to the Federal Government through the senate president to continue with the dredging of the river to save the area from further flooding.