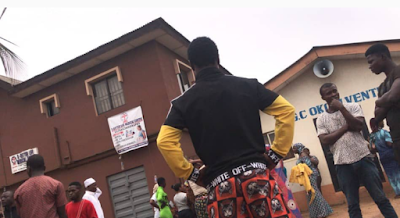 Some operatives of the Special Anti-Robbery Squad have shot a shop owner, known as Biliki, in the Ijegun area of Lagos.

As of the time of filing the report, a crowd had captured one of the police officers.

According to the report, the SARS operatives had chased a suspect to the street, which is close to the palace of the traditional ruler.

The operatives allegedly opened fire on the suspect and one of the bullets hit Biliki, who was in her shop.


“The woman was rushed to hospital where she died. We have taken one of the men. He has been beaten and we want you to come down to see things for yourself,” a resident said.

It was gathered that the mobbed policeman had been taken to the palace of the traditional ruler in Ijegun, where a crowd of irate youths have requested to lynch him.

“He must die. There is no way he will leave that place alive. I can assure you of that.

“I have also been chased out of the palace, but there is a large number of people who have besieged the palace to have him lynched,” a source said.