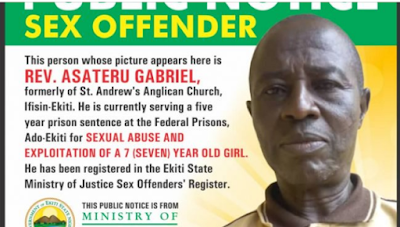 The Ekiti government has commenced the “naming and shaming” of those convicted of rape in the state.

Kayode Fayemi, governor of Ekiti, announced this in a tweet on Friday.

The tweet had a poster of one Asateru Gabriel, a convicted rapist who is already serving a five-year jail term in Ado-Ekiti prisons.

The notice said Gabriel was convicted of sexually abusing a seven-year old girl.

“He is currently serving a five year prison sentence at the Federal Prisons, Ado-Ekiti for SEXUAL ABUSE AND EXPLOITATION OF A 7 (SEVEN) YEAR OLD GIRL. He has been registered in the Ekiti State Ministry of Justice Sex Offenders’ Register.”

Many Nigerians commenting on the tweet expressed satisfaction with the development.

This is a good step of character revolution and change wind that we need in our society, to be rootless in shaming a crime and be glamorous in appreciation efforts and patriotism, we should extend this to other criminal matters like corruption,money laundering etc 👏👏👏
— Yemi Idowu (@yemray) August 16, 2019

Good stuff but if the Judgment of the Lower Court is upturned by a the Supreme Court or Court of Appeal, the Ministry will have to issue a Public apology
— KARMA (@VickyJay__) August 16, 2019