One dead, many injured as fuel tanker explodes on Abuja-Kaduna road 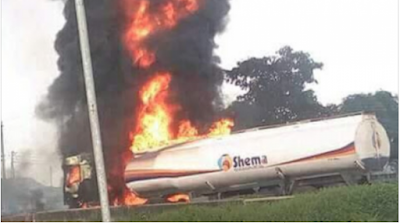 The Niger State Emergency Management Agency (NSEMA) has confirmed the death of one person in a petrol tanker explosion at Dikko junction on Abuja-Kaduna expressway.

Ahmed Inga, the director general of NSEMA, said 10 other people were injured while many vehicles were burnt in the explosion.

Inga said the incident occurred about 10:30pm on Friday.

“We received a report from our Suleja desk officer that there was a tanker explosion and many people were affected, “he said.

“We cannot give the actual number of people that lost their lives, we will confirm that during our assessment; but from the report of our Suleja desk officer, one person died in the incident.

“Many people were injured and several vehicles were completely burnt. ”

He said firefighters from the state fire service in conjunction with their counterparts in the federal fire service were able to bring the inferno under control around 4:30 on Saturday morning.

Inga said the corpse of the deceased had been deposited in the mortuary at Umaru Musa Hospital, Sabon Wuse, while the injured are receiving treatment at the same facility.

He said the agency’s officials would visit the scene of the incident to ascertain the cause of the explosion.