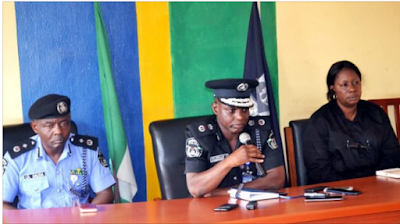 Mohammed Adamu, inspector-general of police (IGP), has approved the posting of Ahmad Abdulrahman as Enugu state commissioner of police.

In a statement on Tuesday, Frank Mba, police spokesman, said he is taking over from Suleiman Balarabe (pictured middle) with immediate effect.

Mba said Adamu ordered the new commissioner to “restore sanity” in the state following the recent killings there.

He added that Balarabe takes over as commissioner in-charge of intelligence at the force intelligence bureau, criminal investigations department, where Abdulrahman was serving.

“CP Ahmad Abdulrahman holds double Masters Degrees – one in Criminal Justice and another in Conflict, Peace & Strategic Studies, both from the Kaduna State University. He has held many command positions across the Federation, viz. Kaduna, Bayelsa and Ekiti Commands,” the statement said.

Mba said the new posting is predicated the CP’s “action-oriented approach” to work as well as his “track record of outstanding leadership and interpersonal relations.”

“The IGP has charged the CP to bring to bear his wealth of experience, leveraging on the Force policy on Community Policing and Intelligence-driven crime fighting strategies towards overhauling the security architecture of the coal-rich State,” he also said.

The development comes amid recent attacks in the state, with at least two priests killed and abductions of many persons.

The state government had said it would employ 1,700 guards to man the forests and bushes in the state.