I governed Abia state with my own money -Orji Kalu 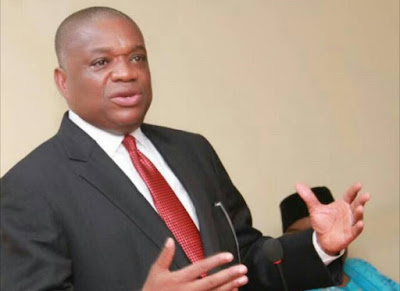 Orji Kalu, former governor of Abia, says the state never had the alleged N7.6bn he was accused of laundering when he was governor between  1999 and 2007.

In his testimony at a federal high court in Lagos on Tuesday, the former governor said he governed the state with his own money in the first six months of his assumption.

He is standing trial alongside Ude Udeogu, an ex-commissioner for finance in Abia and Slok Nigeria Limited, his company, bordering on money laundering to the tune of N7.6 billion.

Kalu, who is the chief whip of the senate, allegedly committed the offence between August 2001 and October 2005 while in office as governor.

Responding to a question from Awa Kalu, his lawyer, during cross-examination, the former governor said there was no way he could have stolen “what was not in existence”.

He said it was difficult for him to run the state with the allocations from the federal government, adding that he spent his own money to run Abia for the first six months.

“The monthly allocation of Abia state when I took over in June 1999 was N168 million. It was averaging between N168 million and N172 million monthly. The first month that I came in, there was even no money to buy diesel. I spent my own money to run the state for six months.

“The highest money I got as governor came from 2004 when we had about N1 billion and from that time up till May 2007 before I left, what we had was N1.6 billion.

“Throughout my stay in office, I never owed salary and pension. When I took over as governor and before I left, we moved it up to N500 million. It was from this that we were able to do a lot of things.”