Barcelona look to Messi for inspiration 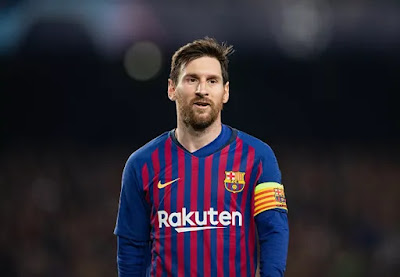 Lionel Messi could be ready to play against Real Betis on Sunday and Barcelona could do with him back.

In other circumstances, Messi might have left it another week, having missed the whole of pre-season with a calf injury he sustained in his first training session back.

But after rejoining his team-mates on Wednesday, the temptation will be to put Messi straight to work, to lift the mood and minimise the chances of what would be a disastrous second slip in La Liga.

One defeat, by Athletic Bilbao inside a bouncing San Mames on the opening night and inflicted by a freakishly brilliant bicycle kick in the 89th minute, might ordinarily have been accepted as a blip.


“San Mames is always a difficult place to play,” said Gerard Pique. “When you’re not at your best, they make you look stupid.”

Yet memories of Barcelona’s capitulation in May remain fresh.

The humiliation in the Champions League and submission in the final of the Copa del Rey mean this team and, in particular, their coach begins the season very much on the back foot.

Ernesto Valverde is never far from blame, suspicion about his style and suitability always bubbling under the surface, despite the fact he is hoping to become the first Barca coach since Pep Guardiola to win three La Liga titles in a row.

When Messi tweaked his calf, it was assumed an attacking roster of Luis Suarez, Antoine Griezmann and Ousmane Dembele would cope.

Instead, Suarez and Dembele both picked up strains against Bilbao while Griezmann delivered the sort of hesitant display to suggest he may also need time to adapt.

“This league is hard,” Griezmann said. “We have to bounce back.”

Another muscle injury for Dembele, his fifth in two years at Barcelona, is a concern, especially after the 22-year-old reportedly took time off in France instead of undergoing medical tests.

It all means Messi’s return carries added urgency, even if it remains more likely the Argentinian will come off the bench at Camp Nou than being named in the starting line-up.
The lure of Neymar also grows, even if Barcelona are yet to agree on a deal with Paris Saint-Germain. The prospect of Real Madrid jumping in too surely plays on the mind of president Josep Maria Bartomeu.

Coming into the season, it was Madrid with the darker clouds hanging over them after a poor pre-season left some wondering whether Zinedine Zidane, more than Valverde, would soon be feeling the heat.

Instead, a retro-looking side, without a single summer signing, and with Gareth Bale, opened up last weekend with an assertive 3-1 win away at Celta Vigo.

“We had difficulties in pre-season with our results but not our work,” Zidane said. “It was essential to start this way, by playing well and winning.”

Bale was excellent and with Eden Hazard not expected back until after the international break, the Welshman should continue his reintegration against Real Valladolid on Saturday.

“We have to turn over a new leaf,” said Sergio Ramos. “We can’t regret or celebrate what’s happened before. We start from scratch.”

Atletico Madrid made a winning start too, at home to Getafe, even if a slightly nervy 1-0 win felt rather familiar, despite a handful of attacking signings this summer, including the hugely talented Joao Felix.

Still, Getafe was arguably the toughest opponent to break down last season. Atletico might have more joy on Saturday away at Leganes.