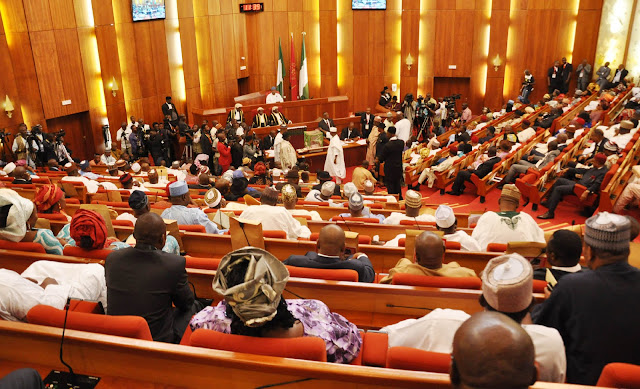 It was also gathered that the lawmakers earn far more than their counterparts in other parts of the world, including developed countries.

Nigeria’s bicameral legislature comprises 109 senators and 360 members of the House of Representatives drawn from across the country.

The Federal Government had recently increased the country’s minimum wage from N18,000 to N30,000 ($98.36). Even though it has yet to be implemented, when it eventually takes effect, the emolument of a senator would be 505.72 times the minimum wage.

This also means that a senator’s monthly take-home pay can pay the salaries of 506 workers earning the minimum wage while that of a representative can pay that of 380 workers.

In a related development, the emoluments of lawmakers in Nigeria are more than what many other lawmakers take across the globe, even in economically advanced nations where per capita income is much higher than that of Nigeria.

At $37,341.53 per month for their lawmakers, the earnings of a member of Nigeria’s House of Representatives is 18.23 times higher than what a Ghanaian lawmaker earns while that of a senator is 24.29 times higher.

The minimum wage in the West African country which joined the league of oil producing countries a few years ago is GHc9.68 per day, which translates to $290.4 per month.

When Ghanaian lawmakers called for wage increase a few years ago, some of them argued that they were poorly remunerated when compared to what Nigerian lawmakers earned.

Members of the House of Lords who are appointed (or by inheritance) do not take any salary. However, they could claim £300 as sitting allowance. The ordinary member earns a salary of £79,468 per annum which translates to $99,952.86.

The official site of the United Kingdom’s parliament said, “The basic annual salary for an MP (Member of Parliament) from 1 April 2019 is £79,468. MPs also receive expenses to cover the costs of running an office, employing staff, having somewhere to live in London or their constituency, and travelling between parliament and their constituency.”

It noted that annual changes in MPs’ pay were linked to changes in the average earnings in the public sector using Office for National Statistics figures.

Kenya is reportedly one of the countries in Africa where lawmakers earn outsized incomes. Report from Africa Check showed that the country’s lawmakers get $7,200 per month.

Other benefits accruing to the East African lawmakers include personal car loan up to $67,400. The loan is, however, repayable at three per cent interest rate. They are also entitled to an official car grant of $48,000 per five year term (This means $9,600 per annum or $800 per month) and car maintenance of $3,440 per month as well as a mortgage of $190,000.

Excluding mortgage and car loan, therefore, a Kenyan lawmaker is entitled to $11,440 per month. This pales into significance when compared to a Nigerian rep’s $37,341.53 per month and a senator’s N49,743.17 per month.

Thus, the earning of a lawmaker in Kenya can pay the wages of 86 persons on the country’s minimum wage. The parliament is made up of 349 members.

Given the criticisms of lawmakers’ wages in Kenya, despite that it is higher than what those in Nigeria earns, there had been an attempt to reduce the earnings by 15 per cent, but it could not be ascertained as of the time of this report if the process scaled through or not.

The earnings of Canadian lawmakers are adjusted on April 1 taking into consideration the inflation rate and other prevailing economic realities.

This means that the earnings of a representative in Nigeria is 5.73 times higher than what a lawmaker makes in South Africa while a Nigerian senator makes 7.64 times what a legislator earns in South Africa.

With a population of 56.72 million people, the country’s National Assembly has 400 members while the National Council of Provinces contains 90 members.

Findings by our correspondent revealed that what ballooned the earnings of Nigerian lawmakers beyond their counterparts were not the prescriptions of the Revenue Mobilisation Allocation and Fiscal Commission but allowances, including running costs, appropriated by the lawmakers and the management of the National Assembly.

Chairman of RMAFC, Mr Elias Mbam, had told journalists at the inaugural meeting of the reconstituted commission in Abuja recently that any remuneration of a politician or public office holder beyond the stipulation of the commission was not known to the agency.

Meanwhile, the Deputy President of the Senate, Ovie Omo-Agege, has said no member of the National Assembly is collecting jumbo pay.

Omo-Agege, who stated this through his Special Adviser on Media and Publicity, Yomi Odunuga, said lawmakers collected only what the Federal Government approved for them as public office holders.

He said, “The leadership of the Senate, through the Senate President, has explained that the issue of jumbo pay does not arise in the National Assembly. Each lawmaker is paid what is statutorily due to their office and these figures are open to verification by anyone who is interested in doing so.

“All it takes is for such persons to contact the Revenue Mobilisation office and the information would be made available.”

Meanwhile, a five-term member of the House of Representatives representing Oriade/Obokun Federal Constituency of Osun State, Mr Wole Oke, said recently that his take-home pay per month is N606,000 while a rep’s running cost is N8.5m.

In an interview with newsmen, Oke said, “The running costs amount to N8.5m. How much is N8.5m to me as a person? If you have to embark on research, looking at all the bills that I have sponsored in the House, you will see that those bills that I sponsored are not ones you can just come by anyhow; they are not bills that you pick on the shelve.

The National President of the Trade Union Congress, Quadri Olaleye, has called for salary cap for politicians in line with what civil servants also earned

In an interview with one of our correspondents on Saturday, Olaleye said politics in Nigeria had become too attractive because of the huge remuneration that politicians were entitled to, adding that the amount of money Nigeria budgeted for politicians was taking its toll on the economy of the nation.

The TUC boss said, “While we are fighting for minimum wage with no end in sight, we must also begin to look at ways of entrenching maximum wage in Nigeria wage system that will be applicable to all public servants either in the civil service or the politicians we place our trust in.

“When there is a maximum wage that will serve as a cap for what politicians are entitled to, it will make politics less attractive. Only those who are willing to serve genuinely without selfish interest will go into politics if this is successfully done. Politicians should be on remuneration in line with what others receive.”

Olaleye added that genuine means of earning a decent income had been abandoned because of the unfair advantage that political remuneration had over other professions.