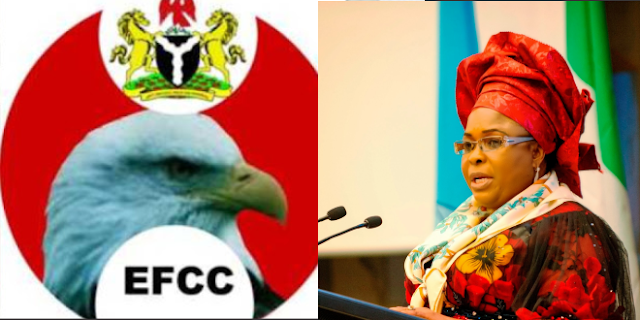 The Federal High Court in Lagos on Monday ordered the permanent forfeiture of the sums of N9.2bn and $8.4m recovered from wife of former President Goodluck Jonathan, Patience.

Justice Mojisola Olatoregun ordered that the funds should be forfeited to the Federal Government.

The judgment followed an application by the Economic and Financial Crimes Commission, which said the funds were proceeds of crime.

Though Patience, through her lawyers, Chief Ifedayo Adedipe (SAN) and Chief Mike Ozekhome (SAN), opposed the application and insisted that the funds were legitimately her own, the judge held that she had “no doubts, at all, that these monies are proceeds of unlawful activities.”

Justice Olatoregun said the respondents “failed to dispel the suspicion created by the movement of the monies within the meaning and contemplation of the Advance Fee Fraud and other related offences Act, coupled with the various extrajudicial statements of the Bureau De Change agents which were not controverted by the respondents.”

“In all of this, taking into consideration the overwhelming evidence provided by the applicant, the mode, the circumstances and the manner involved, using fictitious names, etcetera, to lodge monies in her name by named and unnamed individuals and BDCs, I cannot come to a conclusion by any sense of responsibility that these monies are proceeds of lawful activities within the meaning and contemplation of the provisions of the Advance Fee Fraud and other related offences Act 2006; the Money Laundering Act 2004 and the Economic and Financial Crimes Commission Act 2004 and other laws enforceable under the EFCC Act 2004,” Justice Olatoregun held.

The judge said the respondents “failed to show cause why the monies should not be permanently forfeited to the Federal Government of Nigeria.”

The EFCC said the respondents were not into “any legitimate income-yielding business venture” as to earn such amounts.

It alleged that the firms were incorporated for the purpose of warehousing proceeds of unlawful activities for Patience.

“The depositors into these accounts are domestic staff of State House, Abuja, who were procured by Dudafa Waripamo-Owei (Jonathan’s Special Assistant on Domestic and Household Matters) to deposit the funds sought to be forfeited in a bid to conceal the true origin of the funds,” the EFCC said in the application filed by its lawyer, Mr Rotimi Oyedepo.

In a 15-paragraph affidavit filed in support of the application, an investigator with the EFCC, Hellijia Tukura, said findings by the anti-graft agency showed that the funds found in the bank accounts linked to Patience emanated from the coffers of the Bayelsa State Government.

He said the funds were moved when Patience served as a permanent secretary in one of the ministries in Bayelsa State.

Tukura said Patience first opened a First Bank account and then “procured” Dudafa, to fund the account with “proceeds of unlawful activities.”

“The said Dudafa Waripamo-Owei procured one Festus Isidohomen Iyoha and Arivi Eneji Peter who were domestic staff attached to the State House, Abuja, to deposit the funds, reasonably suspected to be proceeds of unlawful activities, in to account of the 1st respondent.

“In depositing the funds into the account of the 1st respondent, the said domestic staff, in a bid to conceal their identity, deposited the funds, reasonably suspected to be proceeds of unlawful act, into the 1st respondent’s account, using fictitious names.

“The total sum of $4,036,750.00 reasonably suspected to be proceeds of unlawful activities, were deposited into account No. 2022648664 domiciled in First Bank Plc in the name of the 1st respondent.

“The funds sought to be forfeited to the Federal Government of Nigeria are not the 1st respondent’s lawful earnings but are rather reasonably suspected to be proceeds of unlawful activities,” Tukura said.

But opposing the application, Patience’s lawyer, Adedipe, had contended that it was wrong for the EFCC to tag the money as proceeds of crime, when Patience had not been charged with any crime and when nobody complained that their money was missing.

The SAN said, contrary to the claim by the EFCC, the funds were cash gifts which Patience received when her husband was in office.

Adedipe said such gifts were normal, pointing out that even the wife of President Muhammadu Buhari, Aisha, was seeking to build a university.

The lawyer contended that Section 17 of the Advance Fee Fraud, which EFCC relied upon to seize Patience’s funds, was only applicable to fraudsters.

“It is not the law that if the EFCC finds money in an account and it doesn’t like the owner’s face, it comes to court and says ‘forfeit it’.

“The government is at liberty to apply for forfeiture but the offence must be stated.

“The first respondent is a wife to a former deputy governor, governor, Vice President and President.

“Even the current occupier of the office of the First Lady wants to build a university.”