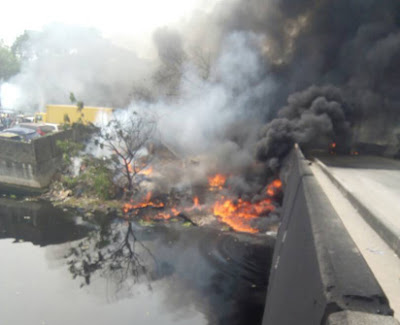 A tanker loaded with petroleum product, on Monday, exploded in Ahumbe village on the Alliade/ Makurdi Federal Highway in the Gwer East Local Government Area of Benue State with several residents feared dead.

An eyewitness, Mr Austin Nembe, told newsmen that the tanker was coming from the eastern part of the country and heading towards Makurdi when it fell while trying to avoid potholes at Ahumbe.

He explained that as soon as the tanker fell, the villagers raced to the scene to scoop fuel and in the process, the vehicle exploded and killed many of the residents.

Nembe stated, “You know that tankers are always partitioned in drums. So, the people went to the scene of the accident to scoop fuel.


“In the process of scooping fuel, there was an explosion, which resulted in several people being burnt to death.”

According to him, a commercial bus with passengers also ran into the accident scene.

However, the state police command confirmed the accident but said it did not receive report of any death.

The state Police Public Relations Officer, Catherine Anene, said, “The DPO in Aliade confirmed that a fuel tanker fell on the road and that the villagers ignored the warnings of the security men and in the process, there was an explosion; many people were injured and rushed to hospital in Aliade.”

When asked if there was any casualty, the PPRO said, “The DPO did not mention the death of anyone.”