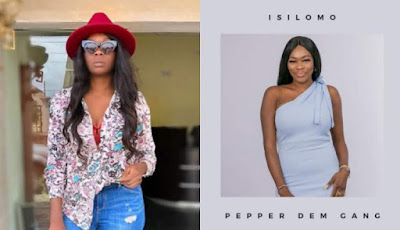 BBNaija 2018 Housemate, Isilomo who was recently evicted has revealed who should be the winner of ‘Pepper Dem’ edition.

Isilomo who made this known during the live show, declared that Omashola should be BBNaija winner.

When asked by Host of BBNaija, Ebuka who the winner should be, Isilomo said “Omashola will be the winner this year, I think and hope he wins.”

She further added that the head of house, Jeff is fake and a pretender in the house.


Recall that Avala and Isilomo were on Sunday evicted from BBNaija ‘Pepper Dem’ edition.

They were evicted after failing the marble game on Sunday night eviction show.

The reality TV star before her eviction had said she was working at a very good company in Lagos, until she got fired in January 2019. Isilomo went on to accuse one of her colleagues for being responsible for her sack.

Taking a trip from Lagos to Abuja after getting fired from her job made her audition for the show where she eventually got selected from the thousands who showed up for the auditions.