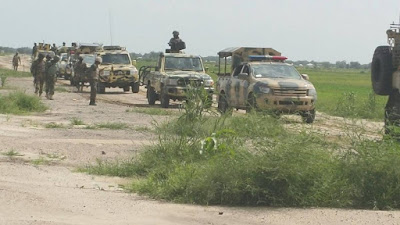 Troops of the 17 Brigade on Operation Harbin Kunama III have arrested a notorious bandit leader known as Mallam Bawa Gomna during operations around Batsari, Safana and Jibia Local Government Areas in Katsina state.

The notorious bandit leader who is a deadly kidnapping kingpin was arrested along side 20 others on within this month of June 2019, in continuation of operations against armed banditry, kidnapping and other criminality in the State.

Confirming the arrests, Col Sagir Musa, Acting Director, Army Public Relations said, “The criminal elements were apprehended in action while others were based on credible intelligence. It is worthy of note to mention that captured bandits and others on the run were responsible for terrorizing residents of Batsari, Safana, Jibia and other areas of the state”.

He further stated that “the apprehended criminals have confessed to taking part in several banditry, cattle rustling and other sundry crimes. Presently they are being profiled and will be duly handed over to the respective law enforcement agency for further interrogation and prosecution.


“The Commander, 17 Brigade, Brigadier General Aminu Bande wishes to appreciate all those whose information led to recent successes. He equally wishes to enjoin members of the public to continue to give out credible information to help troops record more successes against bandits and other criminals in order to flush them out completely”.

Musa said the tremendous achievements recorded by troops of the Nigerian Army within the last few weeks are in line with the objectives and core mandate of Exercise Harbin Kunama III aimed at bringing an end to the activities of cattle rustling, armed robbery, kidnapping and banditry in Katsina state and environs as troops continue to dominate all suspected areas that are known to be the stronghold of bandits with patrols to deny them freedom of action.