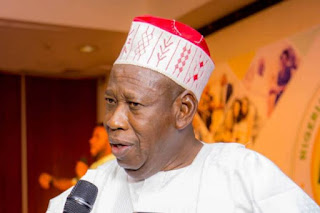 Governor Abdullahi Ganduje of Kano State on Tuesday dismissed reports that a gorilla swallowed N6.8m from a zoo in the state.

He stated that the zoo in question had no gorilla among its animals.

Ganduje, who spoke with reporters at the Presidential Villa, Abuja, disclosed that preliminary investigations into the case had already shown that the zoo was attacked by armed robbers.

The governor added, “You know l have directed the anti-corruption agency in Kano to investigate the issue. All l can say now is that preliminary reports indicate that there was an armed robbery in the zoo, and not the issue of a gorilla.

“The issue of a gorilla is junk journalism. This is because there is even no gorilla in that zoo.”

However, the governor said the outcome of the investigation would give a complete picture on what transpired at the zoo, especially the decision of the officials to keep such a huge amount of money there.

Ganduje also spoke on the crisis between the Emir of Kano, Lamido Sanusi II, and the state government over an alleged misappropriation of N4.2bn by Sanusi and the creation of five additional emirate councils by the governor recently.

He said efforts were being made to resolve the matter.

When asked whether the quarrel with Sanusi was political or he was about to remove the emir, Ganduje demanded proof that he wanted to sack the former Central Bank of Nigeria governor.

He said, “Who told you that (removing Sanusi)? Discussions are still going on.”

Speaking on why he visited President Muhammadu Buhari, the governor said he was at the villa to brief the President about the security situation in his state.

He said, “Our emphasis is on community policing, community participation, especially those communities located around the forest areas of the state.

“So, we have built a synergy with the security institutions and our traditional rulers. The traditional rulers are always there and they also get a lot of security reports and they use the reports to maintain peace in their domains. So, as of today, Kano is one of the most peaceful states in the country.”

Meanwhile, the Kano State Police Command, on Tuesday, said it had arrested four suspects in connection with the missing N6.8m alleged to have been swallowed by a gorilla at the Kano Zoological Garden.

The command’s spokesman, Abdullahi Haruna, who confirmed the arrest, said those arrested included security officials and the zoo’s accountant.

Haruna, however, wondered why such a large sum of money should be kept within the zoological complex for a period of five days after the Sallah holiday.

“Whoever that is found guilty at the end of investigations will be charged to court,” he said.

When contacted, the Managing Director of the Kano Zoological Garden, Umar Katchakobo, said he would not comment on the development because the matter was being investigated.