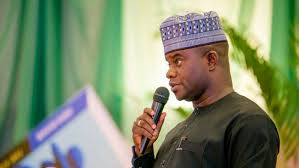 Kogi State Governor, Yahaya Bello, on Friday declared that he is losing no sleep over winning his reelection in November.

According to him, he will easily win the election with wide margin.

He spoke with State House correspondents after meeting President Muhammadu Buhari at the Presidential Villa, Abuja.

He said “I am the Governor today and Insha Allah, l will return back as the Governor for another four years, after the November 16 election.


“As for the ticket, the analogy is that the tenant cannot send the landlord out of his house. So, APC in Kogi state was rebuilt by me, after the good job done by our late leader, His Excellency, Prince Abubakar Audu.

“After his demise, l came, rebuilt it from the scratch to what it is today. That is evident in the last outing of the party where we had 25/25, in the State House of Assembly.

“We also won 7 out of the 9 contested positions in the House of Representatives and two out of the three Senators representing Kogi state in the Senate.

“So, anybody that is making such noise, does not disturb me, because, in the market place, noise is allowed. You know, in Kogi politics is the loudest, so people must make noise and you can’t stop that.
“But surely, l am very good with my party from the local government to the national level. They know that l am the leader of the party in my state. I have built it and it is very strong. Anytime, any day, we will win elections in landslide.

“That l am going to win in the primaries is given by the grace of God, by whichever means, direct or indirect,” he said

The governor added “Secondly, in the November Governorship election, we are not just talking of winning, we are looking at the margins. The margin is going to be such that whoever comes far second, will be discouraged to go to court.”

On the significance of declaration of June 12 as Nigeria’s Democracy Day, he said that Nigerians cannot thank President Buhari enough for the masterstroke of recognizing an icon synonymous with democracy, the late Chief MKO Abiola.

He said “I think something would have been wrong if he had not done this. For effectively doing it well, we can’t thank him enough. It is so significant for us and the future generation to know that this man paid the supreme price for the democracy we are enjoying today.

“We continue to pray for him to do more for the country. He has blazed the trail. It’s significance for politics and politicians

“It politics, we have to be real we are in this politics to serve. Chief MKO Abiola was out to serve us. He was denied. President Muhammadu Buhari is serving us and he has also recognized the man who paid the supreme sacrifice and what this means is that we must remain real and have the interest of the masses at heart and serve them to the best of our ability.” he said

On what Nigerians should expect from the party as it is now heading the National Assembly leadership, he said that programs and projects will now be quickly and easily implemented.