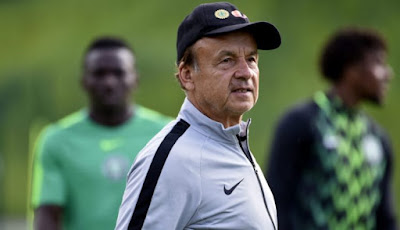 Though the Super Eagles won their opening match in the Africa Cup of Nations clash with Burundi, coach Gernot Rohr disclosed that Burundi made his team suffer before they scored the lone goal.

He described Burundi as a very difficult opponent for Nigeria.

It took the three-time African champions 77 minutes to break the deadlock at the Alexandria Stadium thanks to a cool finish from Odion Ighalo.

The goal separated the Super Eagles from the Swallows, who were playing their first game at the Afcon finals.


At the end of the game, the 65-year-old coach said that Burundi made his team ‘suffer’ before scoring the only goal in the match.

“It was a very difficult match for us because this team of Burundi is very organised. Olivier – the coach, I know him very well and he has a lot of experience,” Rohr said after the game.

“They also qualified from a tough group that has Gabon, Mali and they come through. We saw the games, they were unbeaten in the qualifiers.

“It was not easy, especially very difficult to score the first goal. If the first goal is not coming quickly, you suffer and you have to work hard to score and to win the matches.

The victory earned the Super Eagles massive praise from the fans, but Rohr is looking forward to another tough match when they face off against Guinea on Wednesday.

“The Nigerian supporters are happy that we won the match, and it’s good to win the first match, it’s never easy,” he continued.

“The second match will also be difficult against a wonderful team of Guinea, and the third one, Madagascar, is nothing to lose. We will try to give our best and I think it’s good to start slowly and we come higher and higher.”

The win moved Nigeria to the summit of Group B with three points after their opening game.