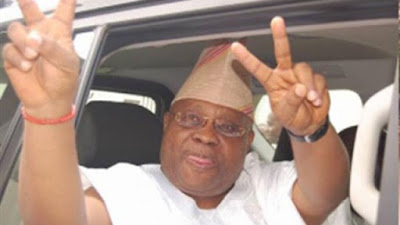 Dele, brother of the candidate of the Peoples Democratic Party in the 2018 Osun State governorship election, Ademola Adeleke, has expressed confidence that the Supreme Court would overrule the Court of Appeal and declare the senator as the duly elected governor of the state.

Adeleke scored 254,698 votes to defeat the candidate of the All Progressives Congress, Alhaji Gboyega Oyetola, who polled 254,345 votes, in the September 22, 2018 election.

However, the election was declared inconclusive by the Independent National Electoral Commission due to the cancellation of results of some polling units.


Oyetola eventually scored the highest number of votes in the supplementary election to emerge as the winner of the polls.

But the Election Petitions Tribunal upturned Oyetola’s victory and pronounced Adeleke the winner.

However, the Court of Appeal last week ruled in favour of Oyetola, setting aside the ruling of the tribunal.

Dele, in an interview with journalists, said the substance of the case before the appellate court was thrown away because of “mere technicalities”.

He said, “One had a high level of expectations regarding professionalism and expected some detailed work to be done. But somebody just threw everything away on mere technicalities and ignoring the substance of the case. This rubbishes everything that justice is supposed to represent.

“Justice is not supposed to be about technicalities. It is absurd. There is no how you will hear about such and will not be disappointed but his morale has not dampened. Senator Ademola Adeleke is a son of Balogun (war commander) so, such cannot dampen his spirits.

“Everybody knows that Senator Ademola Adeleke is the legitimate winner and the holder of the mandate of the people of Osun State. We trust that the Supreme Court will make that happen.”