Nigeria not a colony, we won’t accept foreign interference – Oshiomhole 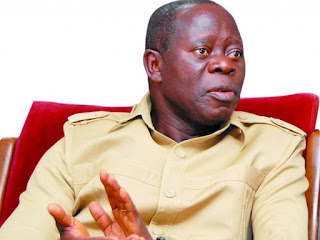 National Chairman of the All Progressives Congress (APC), Comrade Adams Oshiomhole has said foreign interference in the internal affairs of the country will not be accepted because Nigeria is not anyone’s colony.

Oshiomhole who was reacting to the statement by the US, UK and EU on the suspension of the Chief Justice of Nigeria (CJN), Justice Walter Onnoghen, said: “The thing is that Nigeria is not a colony. I think we all have to be careful. We must defend the sovereignty of our country.

“When they dismiss judges in Europe…judges have been dismissed in the United States when they are found guilty of corruption and the Western world cannot on the one hand when it suits them, describe Nigeria as fantastically corrupt and when a corrupt judicial officer is being charged, people want to interfere.

“If he has such memory failure about the size of his number of accounts as to fail to declare them, you and I know that not even ignorance is an excuse in law. So, why are we being hypocritical?

“And at a certain level of responsibility, it’s not even about legal technicalities. It’s about the moral weight, the moral burden you carry.

“So, nobody should make us feel as though we are at the mercy of any other country. The future of Nigeria is in the hands of Nigerians and our laws are clear. Our laws are meant to be obeyed.”

“I don’t understand what the noise is about. Some people say even if it is true, is this the proper timing? What is the best timing to prosecute a crime? Should we suspend criminal justice pending elections?

“Then, some people say you know, because of the very unique role or rather, very delicate role the judiciary has to play in settling elections issues, that is the more reason that people are worried about the timing.

“My question is, given that important role of the judiciary in times like this, is that the reason why you should allow a judge who has professed for breaching laws of the land, is that the reason to allow him to preside, to adjudicate over issues that have to do with fairness and justice?” he said.