Sambo Dasuki will be tried in absentia – Court 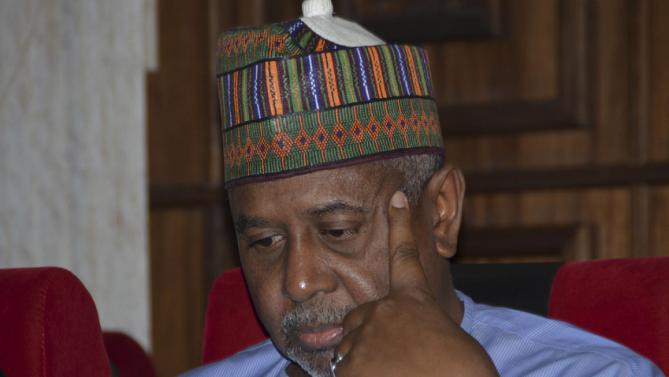 The Federal High Court in Abuja on Monday ordered that the trial of detained former National Security Adviser, Sambo Dasuki, on charges of money laundering and illegal possession of firearms would proceed in his absence.

Justice Ahmed Mohammed, in making the order, invoked the provision of section 352(4) of the Administration of Criminal Justice Act 2015, which allows the trial of a defendant to proceed in their absence if there is no reasonable explanation for the absence of the defendant.

The judge fixed December 11 for the continuation of trial with or without Dasuki in court.

He noted that the ex-NSA, who will be three years old in the custody of the Department of State Services by December 30, 2018, wrote a letter dated November 12, 2018 to the court informing the court of his unwillingness to appear in court for his trial.


Justice Mohammed added that Dasuki’s letter, coupled with his absence from court on November 13, the day after he wrote the letter, and on Monday, had shown that he was no longer interested in appearing in court for trial.

The judge ruled, “It is very clear that the defendant is not willing to be attending court for his trial.

“I hereby invoke the provision of section 352(4) of the Administration of Criminal Justice Act by ordering the trial proceed in his absence.”

Earlier moving the application for the invocation of section 354(2) of ACJA, the prosecuting counsel, Mr. Dipo Okpeseyi (SAN), informed the court that the prosecution had complied with the earlier order of the court directing the prosecution to file an affidavit stating that the ex-NSA had refused to attend court.

He noted that the retired military officer had refused to attend four court sessions since January 2018.

Okpeseyi said, “He has been absent for four times. To compound the effrontery, he wrote to this court.

“That is a direct challenge to the authorities of this court.

“We urge this court not to take the challenge lightly.”

But opposing the application, defence counsel, Mr. Victor Okwudiri, challeged the competence of the affidavit, which he said failed to bear the seal of the lawyer who deposed to it.

He maintained that the failure to affix the lawyer’s seal to the affidavit amounted to a breach of Rule 10(1), (2), (3) of the Rules of Professional Conduct.

Okwudiri added that the affidavit failed to comply with the earlier order of the court which, according to him, directed the prosecution to state the fact that Dasuki had failed to appear in court in respect of the day’s proceedings.

He said in contravention of the said directive, the prosecution had only given an account of the alleged instances of alleged previous refusal of the defendant to come to court but not for Monday’s proceedings.

But dismissing the grounds of objection, Justice Mohammed noted that the affidavit was filed in accordance with the court’s earlier directive.

He said the affidavit did not breach the Rules of Professional Conduct for Legal Practitioners as alleged by the defence counsel, as the lawyer who deposed to it did so in her capacity as a witness and not as a lawyer.

Dasuki had in his letter urged the court to stop his trial on the grounds of the Federal Government’s continued refusal to comply with the series of court orders granting him bail.

He cited five court orders, including one by the Court of Justice of the Economic Community of West African States that ordered his release but continued to be violated by the Federal Government.

His letter dated November 12, 2018 was addressed to the Registrar of the Federal High Court, Abuja.

The letter personally signed by Dasuki, was titled, ‘Unabated persecution of Col. Mohammed Sambo ( retd.) by the Federal Government of Nigeria’.

He stated in the letter, “At this point, I strongly believe that there must be an end to this hypocrisy and lopsided/partisan rule of law.

“Since the Federal Government has resolved not to comply with judicial orders directing my release, it is better for the court to also absolve me of the need to submit myself for further prosecution.

“Justice should be evenly dispensed, as opposed to same, being in favour of the Federal Government of Nigeria.”

Dasuki is currently being prosecuted on three sets of charges with two of the sets relating to his alleged diversion of funds meant for the purchase of arms, which is pending before the High Court of the Federal Capital Territory, Maitama, Abuja, and the other set bordering on illegal possession of firearms and money laundering pending before the Federal High Court in Abuja.

He narrated in his letter how he had at different times been granted bail by the courts in respect of the three sets of charges but the Federal Government refused to comply with the orders.

He recalled that he was re-arrested at Kuje Prison in Abuja on December 29, 2015 shortly after he was released on meeting the terms and conditions of the bail granted him in respect of the three sets of charges instituted against him before different judges.