Reasons why Atiku will fail in 2019 - Tinubu 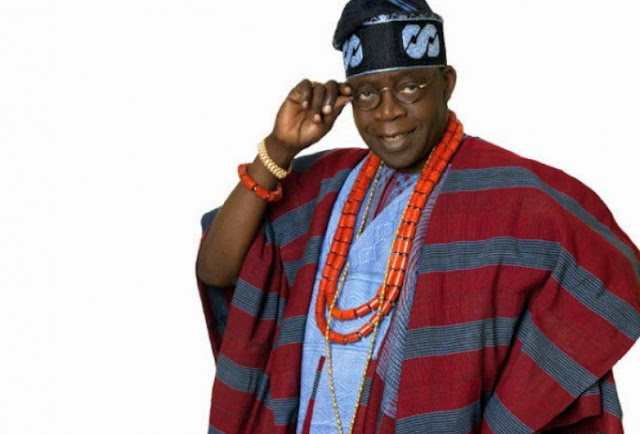 He delivered a firm verdict on PDP presidential candidate Atiku Abubakar’s ambition, saying he cannot win because Nigerians “will not go back to the illusion of the PDP”.

He said no matter the attempt to dress up the former ruling party, “the leopard cannot change its skin”.

The PDP ruled for 16 years during which Nigeria earned so much money from oil but made no corresponding progress in infrastructure development — so goes the popular thinking.

Asked if he was jittery about Atiku’s meeting with his party chiefs in the United Arab Emirates (Dubai), Tinubu said: “We don’t fear, whether it is in the jungle or in Dubai or in Abu Dhabi; people are free to meet and strategise in anyway they want but we are not going back to the illusion of the PDP. It is not possible; Nigerians will not do that.


“They say slow and steady wins the race. We inherited that from our forefathers and knowledgeable people. We can’t go back to the pit that we inhabited for 16 years. They can strategise from anywhere but a leopard cannot change its skin,” he said.

Tinubu spoke after a meeting with President Muhammadu Buhari at the Aso Villa in Abuja.

The meeting is believed to be part of the trouble-shooting effort by President Buhari on the issues that emanated from the APC primaries.

Tinubu, who arrived at the State House at about 3.56 p.m, moved straight into the President’s office.

The President’s meeting with the APC stalwart and National Chairman Adams Oshiomhole came less than 24 hours after Buhari hosted aggrieved APC aspirants to a dinner at the State House.

At the dinner were governorship, national and state assembly aspirants who failed to secure the party’s tickets. Oshiomhole did not attend the dinner.

Asked if he is in support of Oshiomhole’s removal, Tinubu said: “No. We all have to respect party supremacy. You were all here when we had the Congress, we elected the new executives, the convention we had it, the NEC was formed and we surrendered to avoid conflict, to avoid domination, to avoid abuses of power, we surrendered our rights, all rights to the National Working Committee headed by Adams Oshiomohole.

“That the National Working Committee should set up electoral bodies to supervise various state congresses and elections. ‘We signed off for it’. So, if it is not in our individual favour, so be it.

“We gave three options, consensus; where there is no consensus because if you are more than two or three and you cannot agree to one candidate, you go to the next level.

“The next level is the stakeholders delegate and you have to be supervised by the National Working Committee of the party, national election committee of the party. That shows party supremacy or the freest option; the less cumbersome is to open direct primary, line up and count the number, 1,2,3. If you win, you win and if you fail, go home.

“Then appeal committee was set up to listen to all appeals; internal mechanism for conflict resolution. It was there; you cannot turn round against that, you cannot turn against all of that.

On the purpose of his visit to the Presidential Villa, Tinubu said: “The meeting is about the nation, the country, our people, peace, stability and economic progress.”