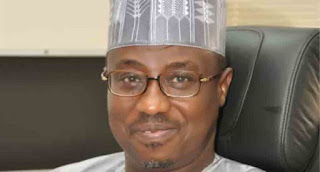 The Spokesperson for the anti-graft agency, Wilson Uwujaren, told newsmen on Friday that the commission was not sweeping the matter under the carpet.


The petitioner, Bako Waziri Kyari, who claimed to be a nephew to Abba Kyari, had during a popular radio programme, Berekete Family, on Human Rights Radio 101.1FM in Abuja, said that Abba Kyari and Sani Ado, whom he claimed worked with the Bureau of Public Procurement, allegedly collected N29.9m from him in order to facilitate the award of a contract.

He also said during the programme that he had written a petition to the EFCC but the commission refused to treat it, insisting that it could not investigate the President’s aide.

But in its reaction, the EFCC spokesperson said, “The petition by Bako Waziri is being investigated by the commission.

“Any serious investigation takes time and it is presumptuous to conclude that the EFCC is non-committal simply because you did not receive instant result. This is how investigations are done.”

Bako, an indigene of Bama, Borno State, had told Berekete Family, “Abba Kyari asked if I had a company registered with the Corporate Affairs Commission. I told him I did and so he asked me to come down to Abuja.

“We met at least four times at Caledonia Hotel on Gana Street, Maitama. We discussed there. The hotel should have CCTV and this can be confirmed.

“Abba Kyari collected the documents of my company. He said I would supply 15 Toyota Hilux vehicles to the Presidential Villa. He gave me an agreement to sign and I signed two documents.

“He collected two letterheads from me, 12 passport photos and introduced me to Sani Ado and Alhaji Ibrahim.

“He said anytime they needed money, he would let me know so that I could give the money to Sani Ado.

“Ado began collecting money from me to process the contract. Before depositing money into Ado’s account, I always alerted Abba Kyari and he would tell me to go ahead.

He said Ado called him later to tell him that the money had been paid.

Bako, however, said he never received the funds as Ado continued to give him flimsy excuses.

He said he got frustrated and then wrote a petition to the EFCC.

The petitioner, however, said he was disappointed by the response of the EFCC.

He added, “Some officials loyal to Abba Kyari refused to help me. I went to meet an official petitioner at Block C in the EFCC. He is very close to the acting Chairman, Ibrahim Magu. The official asked me to bring the petition to him but by the time I got there, he had called Kyari to inform him of my presence.

“Abba Kyari called me on the phone to tell me that he knew I was at the EFCC.”

Bako said he quickly changed his mind and decided not to use the EFCC any longer. He, however, said friends from whom he borrowed money began to pester him.

He said a friend decided to report him to a policeman, DSP Tijani Bulama.

The petitioner said he explained the matter to Bulama and even gave him Abba Kyari’s number to prove that he was telling the truth.

Bako said Kyari promised to return the money in a few days but never did.

He added, “The policeman threatened to make the matter public, but the following day, men of the DSS stormed Tijani’s home and arrested him.

“While in detention, the policeman under duress, called me, asking me to meet him at Eagle Square. On getting there, men of the DSS arrested me and took me to their office. The DSS men asked if we had informed anyone and we said no.

“They took our statements and Abba Kyari later came to the DSS. He, however, refused to speak to me. The DSS officials forced me to lie that I gave the policeman N250,000 to blackmail Abba Kyari but I refused. So they detained me for two weeks while the policeman was detained for a month.”

He said it was Kyari that asked the DSS to release him and promised that the matter was a family one and would be resolved internally.

The petitioner said he waited for another seven months but Kyari never paid him his money.

Bako said he decided to approach the EFCC a second time but through another official, Nura Buhari.

“Bashir instructed that the investigation must not include Abba Kyari. They took my statement at Block B but moments later, Abba Kyari called me again. When I picked up, Kyari told me he was told that I was at the EFCC but I denied being there

“All of them at the EFCC began to feel intimidated. Even Magu is afraid of touching the case file.”

Also speaking on the programme, the policeman who was detained by the DSS, described the entire incident as a case of fraud.

Tijani, who spoke amid tears, said the DSS officials arrested him in the presence of his children and harassed his entire household.

“The next day, I sent a text to Ado telling him that the matter would be made public if he did not repay the money. Before I knew it, armed DSS officials in 10 vehicles stormed my home in PENGASSAN Estate, Lokogoma, and arrested me. They didn’t even allow me wear my shoes. It was on March 27, 2017, there were eyewitnesses there

“They blindfolded me. My child was even crying in the house and they even pushed the little boy to the floor. It was at that point I realised that it was the chief of staff’s handiwork. Even the IG would not send the DSS to my house. I knew that only someone as powerful as Abba Kyari could do such.”

The deputy superintendent said he was brought before the then DG, Lawal Daura.

He added, “Daura said, ‘you are the one trying to intimidate the chief of staff, you want to become a whistleblower’. When I asked if it was true that Abba Kyari duped the man, he asked me to get out of his office.”