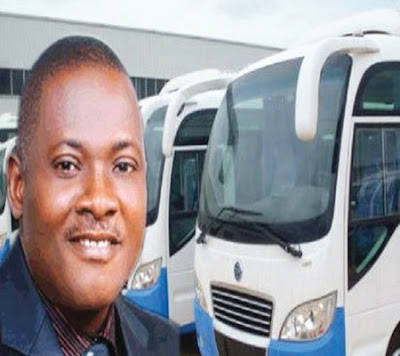 The Economic and Financial Crimes Commission, (EFCC) has dragged the Chief Executive Officer, (CEO) of Innoson motors, Innocent Chukwuma to court for fraud.


The EFCC in a statement by it spokesman on Sunday said he was charged alongside his brother, Charles Chukwuma on four count charge at the Lagos State high on conspiracy to obtain property by false pretence.

In the case, the EFCC is accusing Innoson of obtaining containers of motorcycles spare parts by false pretences between 2009 and July 2011 in Lagos, ‘with intent to defraud. The goods, said to be property of Guaranty Trust Bank Plc, were allegedly obtained from Mitsui O.S.K Lines Limited in Apapa .

The anti-graft agency claims that Innocent Chukwuma and Charles Chukwuma, “with intent to defraud induced the staff of Mitsui O.S.K and Maersk Line Limited to deliver”, to them through their clearing agents, the motor cycle spare parts, moulds of spare parts and steel structures and raw materials called polyvinlchlorid, imported from China.

The charge said the accused falsely pretended that they were authorised by GTB to clear the goods and take delivery of them. EFCC had on Tuesday arrested Innoson in Enugu, stirring some controversy that the arrest bore some ethnic motive and that the agency should not have waded into a dispute between GTB and the businessman. Central to this was the story was that the parties were engaged in a dispute over illegal deductions from Innoson’s accounts by the GTB, with Innoson claiming that the bank was indebted to him and his company to the tune of billions of naira.

In press and TV interviews, he said he had gotten judgement at both lower and appelate courts and that the GTB has an appeal at the Supreme Court. GTB responded tersely that it would not join issues with the businessman as the issues between them are in the court. The EFCC in releasing Innoson on bail Wednesday, explained that he was arrested after he refused to honour invitations by the Commission. He had been arrested by the commission before and granted administrative bail. But he reneged on the bail and his surety could also not be found.

The agency said Innoson and his brother, Charles Chukwuma (who is still at large), were being investigated by the Insurance and Capital Market Fraud Section of the Commission’s office in Lagos over matters bordering on N1.47billion fraud and forgery and other infractions. He was also alleged to have used forged documents to secure tax waivers. ‘Unfortunately the industrialist resisted arrest and stirred controversy by bringing six truck-loads of thugs to block the entrance to his Plot W1, Industrial Layout, Abakaliki Road, Emeni, Enugu, home.

”This was after he initially misled the Police Command by informing them that his home had been invaded by armed robbers and kidnappers despite the fact that operatives of the Commission duly identified themselves to policemen guarding his home. ”His unruly thugs encircled and manhandled operatives of the Commission who had gone to effect the arrest.

“Consequently, a distress call was sent to the Commission’s Enugu Office for reinforcement. `’In all of this, the Commission’s operatives acted with decorum and civility. ”No one was manhandled or assaulted by the EFCC team, and not a single shot was fired, despite the provocation.