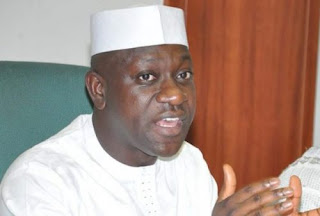 The Economic and Financial Crimes Commission on Tuesday grilled suspended former Chairman of the House Committee on Appropriations, Abdulmumin Jibrin, for five hours at its Abuja head office.

Jibrin, a self-acclaimed whistle-blower, arrived at the office of the EFCC around 10am where he remained until 3pm after which he was asked to leave.

Sources within the commission said Jibrin was asked to shed more light on the budget process and how some lawmakers allegedly implemented constituency projects through some companies that they owned.

An official of the EFCC said, “Jibrin came on Tuesday as requested. He was with us from 10am till 3pm.

He explained the process of budgeting and how the questionable insertions were put into the budget.

“A lot of those accused actually have a lot of explaining to do. We will invite all the accused persons separately.”

Meanwhile, the commission is set to invite the Speaker of the House of Representatives, Yakubu Dogara, Deputy Speaker, Yusuf Lasun, Minority Leader, Leo Ogor and the Chief Whip, Alhassan Ado-Doguwa.

The EFCC had last week blocked over N116m belonging to Ogor.

The cash is the outstanding sum in the accounts of five of the six companies owned by Ogor with which he secured contracts from some agencies as constituency projects.

The EFCC further claimed that N318m was paid to two of Ogor’s companies by the Niger Delta Development Commission.