#EkitiGate Scandal: Tope Aluko cries out - 'My life is in danger for exposing Ekiti election rigging' 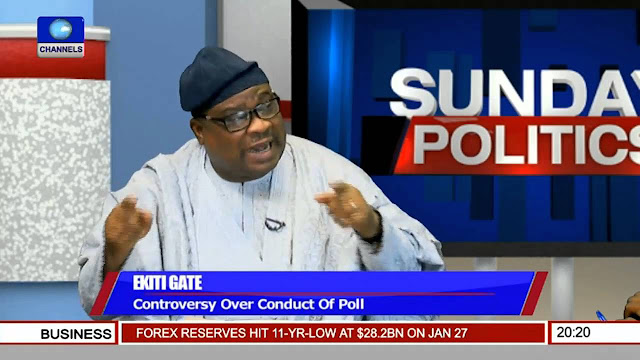 Dr. Temitope Aluko, the embattled secretary of the Ekiti state chapter of the Peoples Democratic Party who blew the whistle on the alleged rigging of the 2014 governorship election in Ekiti State yesterday alleged that his life was under threat.

NigerianEye recalls that Aluko on Sunday was on air on 'Politics Today' a programme on Channels Televison on Sunday, where he gave a breakdown of how the 2014 Ekiti governorship election was rigged in favour of the PDP governorship candidate, now Governor, Ayodele Fayose.

Dr. Temitope Aluko, who on Sunday spoke of how former President Goodluck Jonathan allegedly gave Governor Ayo Fayose $37 million to prosecute the election and directed that the military should facilitate victory for the then PDP candidate, said he escaped from the hands of “fake security men” on Sunday night.

He also indicted many politicians and military chiefs.

But Fayose described him as desperate and denied the allegations.

Also yesterday, All Progressives Congress (APC) urged the government to prosecute all the people indicted by the ex-PDP chief.

A human rights lawyer, Morakinyo Ogele also called on the Economic and Financial Crimes Commission (EFCC) to probe the $37m allegedly given to Fayose by Jonathan.

Aluko said yesterday: “After the live television interview on Politics Today on Channels Television on Sunday at about 9.30 pm, my attention was drawn to the presence of some operatives supposedly from the office of the Inspector General of Police (IGP), seeking to effect my arrest.

“However, having passed though the same route before, my instinct immediately told me that something was amiss. I made some calls and found out that there was no such order to effect my arrest by the office of the IGP or from any other security agency for that matter.

“I was later made to understand that the ‘fake’ security agents were actually miscreants posing as security men and acting on the orders of Ekiti State Governor Ayodele Fayose to get rid of me at all cost.

“I must let Nigerians know that I have made a resolution to let the whole world know what transpired during the Ekiti 2014 governorship poll.”

The Ekiti APC, in a statement by its Publicity Secretary, Taiwo Olatunbosun, called on the Attorney General of the Federation and Minister of Justice Abubakar Malami (SAN) to prosecute all those named in the Ekiti 2014 election rigging drama.

The party said it had twice petitioned the Office of the Attorney General and Minister of Justice on the matter, stressing that the revelations by PDP secretary had made it imperative that the nation’s chief law officer must act now.

The APC spokesman said even though there was nothing new in the PDP Secretary’s revelations, he noted, however, that it had become pertinent to prosecute the suspects as the revelations were again emanating from the insider who participated fully in what is now known as Ekitigate.

“By Aluko’s revelations, we are justified in our claim that our candidate, Dr Kayode Fayemi, never lost that election, but was criminally toppled by a coup d’etat orchestrated by Fayose in cahoots with President Goodluck Jonathan’s administration that illegally deployed money and the military to ensure victory for Fayose.

“It is interesting that more names are coming up in the biggest election scam ever witnessed in Nigeria with the alleged participation of Ifeanyi Ubah of the infamous Transformation Agenda for Nigeria (TAN), a shadowy campaign group for former President Jonathan in the fraud. No wonder Ubah was compensated with a honorary Fellow by Fayose at the Ekiti State College of Education for a job well done.”

Ubah denied ever giving Fayose money for the election.

Olatunbosun went on: “It is in the light of this that we are calling on the Minister of Justice and Attorney General of the Federation to prosecute all the suspects in the election fraud for treasonable felony to preserve the integrity of the Nigerian Constitution.”

The APC said President Muhammadu Buhari should use Ekiti election “fraud” case to convince Nigerians that official impunity and fraud would not have a place in Nigeria under his watch.

“We have seen the Army already tackling the military aspect of the Army Probe Panel report. We expect the police and attorney general of the federation to also toe the line in coming out with the civilian component of the probe report and act accordingly.

“The military men were mere agents used by Fayose to rig the election. Some of the officers implicated in Fayose’s crime had been recommended for various sanctions, including losing their jobs while others are to face prosecution by the EFCC and court martial, according to the military rules and administrative procedure.

“These military men should not be made to suffer alone for the crime committed in conjunction with Fayose and his fellow conspirators in PDP who are still working free as if there is no law in this country,” he said.

Olatunbosun berated Fayose’s media aides, Lanre Ogunsuyi and Lere Olayinka, for claiming that Captain Koli’s audio tape was a forgery, saying, however, that it was gratifying that Fayose, who also first denied his voice on the tape, later admitted that it was his.

“If the Ekiti audio tape was a forgery as they alleged, were the appearances of Koli and Tope Aluko also forgeries?” he said.

He insisted that APC would not accept anything short of comprehensive review of the Ekiti State election saga, even as he urged Nigerians to prevail on the Minister of Justice to compel Fayose to explain to the world what he meant by saying that he collected INEC soft copies and got them printed as captured in Captain Sagir Koli’s tape detailing all activities connected with Ekiti poll rigging.

“Besides Fayose talking on the tape about how INEC gave him soft copies that he printed to win the election, the minister of justice must also compel the governor, who spoke on election result collation in the tape, to tell Nigerians which election result he was collating in Efon-Alaye on June 19, 2014, two clear days before the June 21, 2014 governorship election,” Olatunbosun concluded.

Ogele urged Fayose to resign from office within seven days “because the election that brought him to office was highly compromised”.

He vowed to approach the Federal High Court if Fayose fails to resign to seek a declaration that the election is null and void by reason of the latest facts and figures released by Fayose’s former right-hand man.

The activist-lawyer also challenged the Independent National Electoral Commission (INEC) to explain its own side of the story following the alleged sharing of N1 billion by its officials to compromise the Ekiti poll.

“They have the statutory power to probe this fraud; they should look into it to ascertain whether it is part of the arms money diverted and shared among many people. If truly the Federal Government is determined to fight corruption, EFCC, as a matter of urgency, should comb Ekiti for this gigantic fraud.”