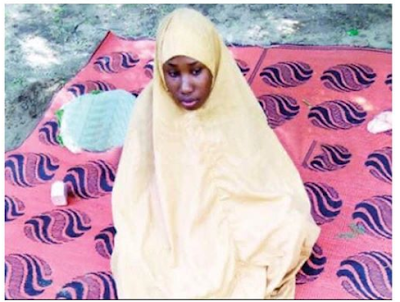 A cross-section of Nigerians have reacted to reports that abducted Dapchi schoolgirl, Leah Sharibu has given birth to a Boko Haram Commander.

However, reports emerged on Saturday night that Leah was forcefully converted to Islam and married off to a top Boko Haram Commander.

She was also reported to have been delivered of the baby a few weeks ago following her forceful marriage.

Reacting, Nigerians blamed the government for the incident.

In a series of tweets,  Nigerians lamented that government had failed.

The tweets read below:

@YemieFash: “It has been reported that Leah Sharibu has given birth to a baby boy for a Boko haram commander after being forced to convert to Islam.

“How do you Kidnap a girl child, force your religion on her, rape her severally and impregnate her?

@AriyoAristotle: “What boko haram has done to Leah Sharibu is not different from what the Buhari regime is doing to Nigeria. One missions, different tasks. Discerning minds know better.

“These Islamists are trying to redefine our nation. The Almighty GOD will bring an end to their reign.”

“My uncle relocated to the US a few years ago. He said when he dies Nobody should bring his body back. I thought he was mad. Na me no get sense.”

@thebardogbamola: “Just look at her. Even Patience @GEJonathan called a press conference and cried before the cameras for #Chibokgirls but our mummy here never seemed to care about the poor girl called Leah Sharibu. @OfficialAPCNg mocked patience for trying but look at who we have here.”

@ayemojubar: “I’m expecting to see what #IAmNorth and Arewa Twitter responses would be to Buhari on Leah Sharibu’s child birth. I want to see if they’ll justify this since child marriage is a norm in the North. I’m waiting.”

@ayemojubar: “Leah Sharibu: You can’t force a soul to choose a channel to her maker. Even those that are genuinely converted play religion, not to mention a forced soul. Leah is a temporarily conquered soul not a converted soul. One day, she will grow fat enough to break chains on her neck.”

@SweetShantel: “Rev Fr APC Mbaka when is Leah Sharibu coming back? Maybe her parents don’t have millions of Naira to pay for her prophecy.”

@iamOkon: “Boko Haram abducted Leah Sharibu, forced her to denounce her religion, married her off & she’s given birth. And everything is going on like nothing happened!

“I’m so sorry dear Leah. Nigeria has failed you. We have failed you! This is beyond heartbreaking!”

@ayemojubar: “A painful news regarding Leah Sharibu got broken, and you dare say “New Topic for the Wailers”.

“You will not die well. May this kind of future hijack and molestation never end in your lineage. You will live to experience this, to know how it feels. You put this on yourself.”

@iAGB4REAL: “Imagine Niger Delta militants kidnaps Students, after negotiations released them & kept back one Aisha bcos she refused to convert to Christianity. This country will burn.
I will continue to say it. They abandoned Leah Sharibu wit Boko Haram bcos she is not Muslim
Shame on u all.”